In February 2015, shortly after my mother was diagnosed with cancer, I saw I had a voicemail from an unfamiliar Minnesota number.

“Hi, Emily,” said a friendly voice on the other end.

Is that – ? I thought to myself, brain fuzzed by exhaustion.

I don’t remember word-for-word what he said, but it was something along the lines of “We’ve heard about your mom’s diagnosis and we’re all so sorry to hear it. If there’s anything we can do, let us know.”

And then Kevin Smith, the CEO of the Minnesota Orchestra, hung up the phone.

Looking through the eyes of a normal orchestra president, this call makes absolutely no sense. Because the protocol is set, and the protocol makes sense. Your mission is to raise enough money to keep your institution functioning. To achieve this quixotic goal, conventional wisdom dictates that you spend nearly all of your time with board members and big donors: the gatekeepers of power. If anyone is poor, or has been a particularly irascible opponent of your predecessor (or worst of all, both), you don’t owe that kind of malcontent anything.

But Kevin Smith upended the rules. That phone call signaled the new calculus: if you care about this orchestra, we care about you.

The world has no clue how close the Minnesota Orchestra came to imploding in 2014. If some future chronicler ever unearths all the stories, the world will be shocked. And Kevin Smith will be held in even higher regard than he is now.

When the partisans were exhausted and beaten down, Kevin ushered in a new era of the positive and the possible.

The displays of good faith started early. Upon his appointment, he began attending listening sessions organized by audience advocacy group Save Our Symphony Minnesota. There he addressed everything from programming to internal culture to lobby decoration. “We’re talking about new lighting systems to provide color and shape. Cut-outs of musicians. All sorts of things. Maybe a couple of plants.”

He became a regular fixture at concerts. (Not all orchestra CEOs are.) When I’d get to the hall early and see him jogging up a lobby staircase, I’d shake my head in awe at our luck.

He oversaw a number of jaw-dropping multi-million-dollar donations.

He was hysterically smart and funny during a February 2016 Inside the Classics show on Mozart and Haydn, where host/violist Sam Bergman and conductor Sarah Hicks invited him to publicly defend his recent remarks in the Star Tribune that Haydn is boring. Obviously Kevin is wrong (lol), but damn if he didn’t almost win me over by sheer force of geniality.

He woke up one morning, read the news, and decided to bring his orchestra to Cuba. And then he put in the work to make it happen.

He negotiated a contract for the musicians, wrapping up the final details on the plane ride home from Cuba. That contract was reached 21 months before the deadline.

He was a smiling presence at every tour, always energetic despite the exhausting round-the-clock churn of activity. When I went to Europe to blog about the orchestra’s 2016 tour, he saw me backstage and enthused, “Emily! How are you?” As soon as he ensured I was enjoying the trip, he immediately began rhapsodizing about the musicians’ skill and commitment. His pride in them was palpable.

Then a funny thing started happened. Despite his affability toward all, he balanced the budgets. The previous leadership team had reported a deficit of $6 million in FY2012, and I heard that team swear up and down and all around that balancing a $30 million budget would be impossible.

If you ever were a naysayer, Kevin Smith exposed you as a fool.

We patrons knew that something special was happening. Suddenly we felt appreciated and listened to. We might not always agree with Kevin, but we always trusted him. Initially Kevin was brought on as interim CEO. I don’t know if the musicians ever called it this, but my patron circle had a tongue-in-cheek nickname for the effort to delay his departure: Operation Rallentando.

When it was announced that Operation Rallentando had succeeded and that he’d stay on as CEO until August 2018, that same patron circle stayed up way too late exchanging messages on Facebook, curating a playlist to express our excitement. It included Beethoven 9, every Te Deum we could think of, and Kool & the Gang’s “Celebration.”

With Kevin Smith, we got inhuman achievement.

I went to New York City almost a year to the day after Kevin left that voicemail. The Minnesota Orchestra was returning to Carnegie Hall for the first time since the lockout. So many patrons came along (the Times labeled us the “considerable contingent”) that it felt like a glorious glamourous field trip for the sweetest dorks in the world.

Before the rehearsal, while I was marveling down the Manhattan street, a familiar face suddenly swept past. I turned around and a grin lit up my face. There was Kevin Smith, striding confidently, optimistically, into the distance, toward something no one else could see. His lovely wife was following, jogging to keep up. She yelled into the wind and the cacophony of traffic: “Kevin, where are you going?”

We’ve all learned so much from Kevin. But the first thing I hope we all take away is his ability to see the undreamed-of so clearly.

The best tribute that we could give Kevin would be to balance the Minnesota Orchestra’s budget before the end of the fiscal year on August 31st, 2018.

It doesn’t feel adequate to the occasion (because it isn’t), but after I click Publish I’m going to donate $100, and I also pledge to add a donation to every ticket purchase I make throughout the season.

I invite you to join me doing one or the other or both. The amounts don’t matter. Here’s a link to donate.

Remember, you are never too poor or too inconsequential to make a difference. Your love of the art makes you worthy. As this 2014 Star Tribune lede put it:

Kevin Smith has put out the word: If you want to help the Minnesota Orchestra, no idea is dumb and no donation too small. 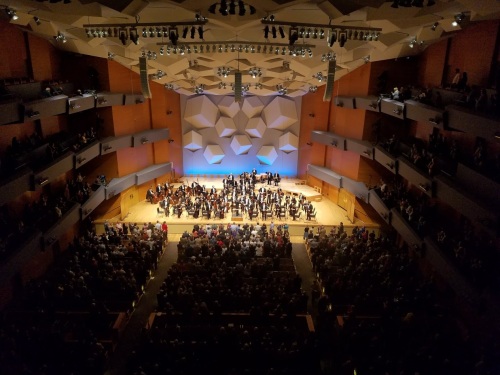 Thank you, Kevin. We owe you more than we’ll ever be able to pay.