Top 10 Similarities Between The Atlanta and Minnesota Lockouts

In case you didn’t know it yet, the Minnesota Orchestra lockout and the Atlanta Symphony lockout are following eerily parallel courses.

Some of the Minnesota folks likely aren’t following the ins and outs of the Atlanta story, while some of the Atlanta folks probably don’t know how much of this s*** has been pulled before. So I think it’s time to assess our shared history. The more patrons know, the more powerful we are.

First, a disclaimer. A lot of the terrible things the Minnesota Orchestra did during the lockout, they’re not doing anymore. The more inclusive leadership style of new board chair Gordon Sprenger and interim CEO Kevin Smith has been working wonders. Leadership is key. There is still a long way to go to rebuild trust, and any number of things could derail the (rather miraculous) progress made so far. But at least we’re headed in the right direction. I feel that’s an important disclaimer to make, because I have zero interest in rehashing a painful past for no reason. At the same time, I feel it’s important for people to know what happened.

So in the interest of bringing the Minnesota and Atlanta communities together, and educating those new to modern orchestral labor disputes, here are ten major similarities between the two lockouts. My longtime readers can doubtless add more in the comment section.

END_OF_DOCUMENT_TOKEN_TO_BE_REPLACED

The end of Straussfest ’14 is upon us, and accordingly, here is the last SOTL microreview of October.

The Pioneer Press covered the performance with a 366-word rave; ironically, the Minneapolis Star Tribune was apparently over in St. Paul for this week’s SPCO show. An embarrassment of riches, I guess.

As always, if you went to the performance, or listened online, please leave your thoughts in the comment section!

Like last week, the concert began with a piece of chamber music – in this case, Strauss’s Sextet from the opera Capriccio. I love chamber music, and it drives me crazy that orchestra tickets are so much easier to sell. Maybe this format of chamber music in the first half, with a big piece after intermission, gives a taste of the magic, simultaneously introducing the orchestra’s individual players to the audience. I worry a bit about the big shoebox auditorium swallowing the performers, but maybe if you have personalities big enough, you can fill it. Every string player sounded divine, and they all have musical personalities that could fill the entire Minneapolis metro, so no worries there. What warmth, charm, delicious informality.

The slender Serenade for Winds was just as delightful. During last week’s wind piece, I wondered if the hall acoustic and lack of conductor was an impediment. But tonight Edo de Waart was on the podium and there was a tremendous sense of direction and crispness.

The big attraction, though, was of course the Alpine Symphony. To introduce it, horn player Ellen Dinwiddie Smith gave a short verbal preface, unveiled an alphorn, and played a short duet with Bruce Hudson. The informality of this feels like we’re visiting in the musicians’ living room. Can any other major orchestra pull this off?

And what a performance of the Alpine Symphony. The ascent had swagger and jovialty in equal measure. Different sections – so many sections! – darted in and out of the intricate texture, suggesting birds and babbling brooks. The sense of luxuriant relief and awe at the summit was palpable…and it’s hard not to tie those emotions to where the orchestra is today. The storm was fricking terrifying in its swirl of volume and intensity, and I know hearing it on the radio shaved off about ninety-five percent of its impact.

Clearly this is one of those pieces you have to hear live to really experience, and I feel terrible I couldn’t make it.

But maybe you can…

This week’s appreciative Minnesota Orchestra concert reviews came courtesy of the Strib and the Pioneer Press, clocking in at 422 and 378 words, respectively. The program at Orchestra Hall was all Richard Strauss: the Suite for Winds, Metamorphosen, Burleske, and Death and Transfiguration. Read on to hear what they sounded like over the radio. And if you were at the concert or listened at home, be sure to leave your thoughts, too!

Strauss’s early Suite for Winds sounded light and lovely. Over the radio, certain attacks came across as less than crisp. Whether that was because of the relatively reverberant acoustic, the lack of conductor, or another reason entirely was impossible to tell. It was such a joy to hear our maestro stretching his clarinet muscle with his first-rate wind colleagues: more of this, please!

The Metamorphosen had a more overt sense of direction than the Suite did, perhaps because Osmo was back on the podium. What a haunting late Romantic lament, tipping from bittersweet exultation to luxuriant despair, often in the space of a single winding phrase. Everyone onstage was spilling their heart’s blood; various passages sounded like string screams. I appreciated violist Ken Freed’s heartfelt introduction to the piece. Between the instrumentation and the informal remarks, the first half almost felt like a chamber music pre-concert to the second half. I loved that eclectic vibe. More of this, please!

The mood lightened and broadened after intermission once the full orchestra came onstage. Pianist and Minnesota native Andrew Staupe exploded onto the keyboard in the Burleske, and he navigated the piece’s manifold challenges – from cascading keyboard-smashing passages to delicate dance-like themes – with energy, spunk, and good old-fashioned Minnesotan humility. Despite the piece’s hushed ending, the audience response was wild, with appreciative whoops and hollers galore, all so very well-deserved. More Andrew Staupe, please!

But without a doubt, Death and Transfiguration was the highlight of the program. First came the heaviness of the opening’s labored breathing, each carefully notated dynamic meticulously observed, ironically making the music feel that much more improvisatory and new. Then came a manic frenzied rebellion, musicians and maestro railing wildly together against death. (For some reason, this orchestra is hugely effective railing against death…) The ultimate transfiguration seemed to float, buoyant with the ecstasy of artistic accomplishment. And as the piece whispered its conclusion, even over the radio, you could hear the sound ring – then evaporate into the hall, testament to a breathless performance and rapt audience.

Normally this is the space in the microreview where I tell you, go buy tickets for tonight’s performance!, but unfortunately there are no more performances; if you missed it, you missed it.

However, there’s still one more opportunity to join in the Straussfest fun, so buy your tickets here. There are still a handful left, and wouldn’t it be nice to close the festival out with a sold-out hall? I highly doubt you’re going to be disappointed.

I need a coat nowadays when I go outside, and we all know what that means:

For those of you who are new (and quite a lot of you are, so hey!), a Microreview is a type of entry I write on Saturday morning after listening to the MPR broadcast of the previous night’s Minnesota Orchestra’s subscription concert, with a word count equal to or lesser than that week’s newspaper review. Microreviews are meant to hone my short writing skills, provide an alternative perspective to the official critics, promote the official critics, and frankly to provide filler when I’m too busy to write my traditionally novel-length articles on other topics. *thumbs up* Readers are welcome to contribute their own thoughts or Microreviews.

This week’s program was the opening to the Strauss Oktoberfest. Tony Ross the Boss starred in Don Quixote, with the Dance of the Seven Veils and the Suite from Der Rosenkavalier after intermission; the only review in the metro this week came from Rob Hubbard over at the Pioneer Press, and clocked in at 355 words.

The beating heart of the Minnesota Orchestra’s program this week was Don Quixote, the story of the original tilt-er-at-windmills. This orchestra excels at conveying narrative, and that strength was put to fabulous use here. DQ felt less like a tone poem and more like a one-act instrumental opera. At the Adventure of the Windmills, you could practically see Don Quixote lunging about with his lance. “The victorious struggle against the army of the great emperor Alifanfaron) [actually a flock of sheep]” variation cracked me up with its juxtaposition of heroic theme with rambling brass bleating. Tom Turner portrayed to perfection the earnest squire Sancho Panza, especially in his recurring and-that’s-that up-and-down arpeggio. The Ride in the Air was fricking airborne. The death scene was genuinely haunting, even after all the comedy that preceded it. And through it all, Tony navigated the multitude of mood changes with honesty and aplomb. Given that this is less a cello concerto than an orchestral showpiece, I wonder if the best performances might come not from traveling soloists, but rather from principals who know their band. This performance bore out the hypothesis; it was certainly one of the best I’ve ever heard. 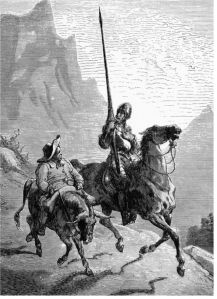 After the heart of Don Quixote, the delicious corny schmaltz of Dance of the Seven Veils and Der Rosenkavalier felt…odd. I might have tweaked the program order. Salome’s dance was masterfully done. There was one marvelously performed skittering pianissimo string passage in particular that just made my violin-loving heart marvel. The Suite from Der Rosenkavalier started off with a few dance-heralding blasts in a tempo brisker than I’ve heard before; I loved it. Since the Mahler performance, I’ve been thinking about sarcasm in performance. I heard a bit of it here. Not in the slow tender heartbreaking moments, but in the more…decadent portions. The snarky vibe might have come partly from the fabulously flexible tempos; Andrew Litton and his players milked those for all they were worth, and to glorious effect.

There’s still one more performance left tonight at eight, and I recommend you take advantage of it. As always, tickets at minnesotaorchestra.org.

Edit at 3:30pm: And if you’re interested, here’s the Strib review, which was published after mine.

It is becoming increasingly clear that the power players in the Atlanta Symphony lockout are the members of the Woodruff Arts Center (WAC) board. This impression was solidified once former ASO CEO Stanley Romanstein resigned and it was revealed that the interim CEO would have no role in negotiations. Nowadays it’s all Woodruff, all the time.

During the upheaval of the past few weeks, I’ve been chatting online with disgruntled Atlanta patrons. Lately we’ve been wondering who the Richard Davis / Jon Campbell equivalent is over at the WAC.

Well, good news: We Found Him!

END_OF_DOCUMENT_TOKEN_TO_BE_REPLACED

Naked Nymphs and the Atlanta Symphony

A provocatively titled blog post made the rounds the other day: “Maybe Atlanta Symphony Should Lock Out Its Marketing Department Instead.” It included a link to the Atlanta Symphony brochure for the ill-fated 2014-2015 season. I clicked it, thinking to myself, well, it can’t be any weirder than the Dallas Symphony’s Beefcake Beethoven –

And then mid-thought this loaded. 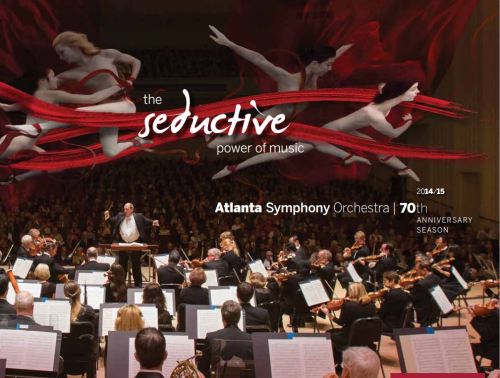