Question: Can I mock the Minnesota Orchestral Association while still leaving its CEO, board chair, and immediate past chair in the Bin of Irrelevancy?

Answer: This is my blog, I’m the queen of my blog, and I’ll do what I want.

Because the inspiration for this entry was just too beautiful in its absurdity to leave alone. I know I’m a few weeks behind the times, as this was sent out on November 1st, but this is a Mona Lisa of absurdity, and I’ve been pretty busy this month and haven’t gotten around to it yet, and I want so badly to mock this Thanksgiving Eve, and like I said, I’m the queen of this blog, and I do what I want, so there. 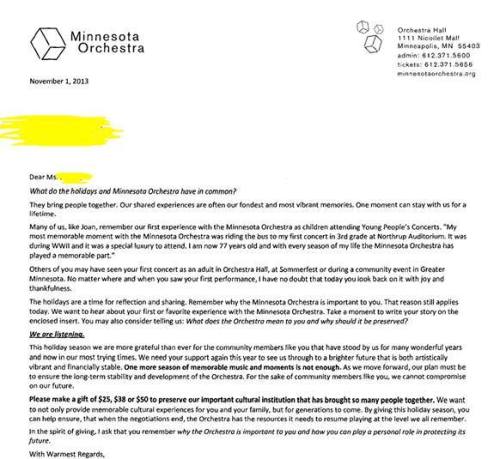 Behold the fount of absurdity!

END_OF_DOCUMENT_TOKEN_TO_BE_REPLACED

The thing that strikes me: by all rights, we should be despondent. And yet – I don’t think I’ve ever been to a more joyful concert.

The Minnesota Orchestra should be playing in its newly renovated hall in downtown Minneapolis. And yet – thanks to a fifteen-month-long musician lockout, they aren’t. Ted Mann Concert Hall on the University of Minnesota campus has been rented for musician-produced concerts instead, and it works just fine.

Stanislaw Skrowaczewski, the former music director of the Minnesota Orchestra, is ninety. Most men his age are crippled or dead. He shouldn’t be physically able to lead magisterial performances of Brahms and Wagner. And yet – here he is tonight, graciously accepting our wild applause, magically drawing forth music, gladly flouting his former employer in the classiest possible way.

The musicians should be performing on a newly renovated stage, fresh from triumph at Carnegie Hall. And yet – their Carnegie concerts are canceled and their music director is gone. Instead, they’re learning the fine art of PR, renting halls, serving on fundraising committees, debating repertoire, coordinating educational activities, and selling out concerts.

My volunteer audience activist friends should be occasional concertgoers and amateur musicians who go to concerts, enjoy them, and then go home to their families. And yet – now they’re devoting endless hours to poring over various orchestras’ financial records, while befriending influential politicians and studying the principles of non-profit management.

I should be curled up at home, a woman in her mid-twenties happy in her anonymity, writing essays about Victorian violinists that nobody reads. And yet – thanks to the lockout, I recently went on a WQXR podcast talking about the impact of social media on the arts with the former head of social media with the Dean campaign.

The last fifteen months have been one long story of “x should be, but y is.” Unintended consequences abound. People have tried to control them, but those who try, inevitably fail.

“It would be easy to be bitter, but I am thankful,” horn player Ellen Dinwiddie Smith tells us before the Brahms symphony. She is thankful for the audience, she says. For her colleagues. But most importantly, she is thankful for music.

We’ll soon announce a star-studded self-produced season to begin in the New Year, Ellen then says, very coyly, and the audience murmurs with excitement.

END_OF_DOCUMENT_TOKEN_TO_BE_REPLACED

I know I’ve deposited Michael Henson in the bin of irrelevancy. And trust me, I’ve enjoyed leaving him there. But occasionally I can’t resist peering into the bin, especially after Bonusgate…and I want to take another peek now.

I was doing some research for a friend the other day when I came across this article from the Strib.

It’s from May 9, 2012. In it, the Minnesota Orchestral Association announced the axing of nine full-time positions (thirteen percent of its administrative staff) and seven part-time positions. In all, sixteen people received the soul-crushing news that their jobs were disappearing. Yes, it was acknowledged that some part-timers might come back after the hall reopened in “the fall of 2013” (how’s that workin’ for ya?), but the full-time position reductions were apparently permanent.

END_OF_DOCUMENT_TOKEN_TO_BE_REPLACED

The Schumanns, Symphonies, and Brahms, Part 3

Here’s the last part of the November Lark Notes, the third part of an essay called The Schumanns, Symphonies, and Brahms. Part I here; Part II here. Buy tickets to the Minnesota Orchestra Musicians’ show here.

It took many years, and many pieces, for Brahms to come to term with the Schumann prophecy.

His first piano concerto, dating from 1859, was his first large-scale work featuring an orchestra. Portions of it had come from the sonata for two pianos in d-minor. Many historians have noted that the initial theme of the first movement bears a resemblance to a fall: Schumann’s leap into the Rhine, perhaps? He admitted openly to Clara that the glowing second movement was a portrait of her. As for the last movement, he was so conflicted about what to do, he unabashedly copied the form of Beethoven’s third piano concerto.

When he finally got around to writing his first published work for orchestra alone, he tried calling the piece a symphony, but couldn’t bring himself to do it. So he hedged his bets: he labeled the D-major serenade a “Symphony-Serenade.” But he soon realized he was kidding himself, and he so he scratched out the word Symphony entirely. He wrote to Joachim: “I had such a beautiful, big conception of my first symphony, and now! – ” The dash said it all.

He was getting nowhere with the highly anticipated Big Work. During this frustrating time he circled back to Clara for intellectual and emotional companionship. In January 1861 he wrote to her, “I sometimes wish to see [you] for the first time again, so that I might be able to fall in love with you all over again. But all the same things are well as they are. Don’t you feel the same?” Practical as ever, she returned, “I by no means wish you to see me again for the first time in order that you may be able to ‘fall in love with me’ (if indeed that can ever have happened); rather love me dearly, truly, and for ever and ever – that is the best of all.”

In 1862, she received a packet of music from Brahms: “imagine the surprise!” she wrote Joachim, “the first movement of a symphony.” It was indeed. Unfortunately, she’d have to wait over a decade for the music to be finished and performed. Once again, Brahms had gotten stuck. He began to look like a horse in quicksand.

END_OF_DOCUMENT_TOKEN_TO_BE_REPLACED

The Schumanns, Symphonies, and Brahms, Part 2

Here’s the second part of the November Lark Notes, an essay called The Schumanns, Symphonies, and Brahms. If you want to see a Brahms symphony in the flesh, buy tickets to the Minnesota Orchestra Musicians’ concert here. Part I is here.

In 1850 Robert Schumann had accepted a music directorship in Düsseldorf. His time there was unfulfilling. Bluntly, he wasn’t suited for the job. Worse, ill health led him to become increasingly withdrawn. In rehearsals with the local chorus, Clara provided piano accompaniment and made suggestions to the singers when Robert was uncommunicative. Although Clara didn’t – or couldn’t – acknowledge it, his career was in decline. Robert, his energy waning, saw Brahms as someone who could take up his cause and bring it further: a Joshua to his Moses.

Accordingly, both Schumanns immediately began encouraging Johannes to write on a larger scale. In his famous article, Robert wrote, “If he will sink his magic staff in the region where the capacity of masses in chorus and orchestra can lend him its powers, still more wonderful glimpses into the mysteries of the spirit-world will be before us…” In her journal Clara wrote, “A great future lies before him, for when he comes to the point of writing for orchestra, then he will have found the true medium for his imagination.” There was something to that assessment. The piano works that Johannes had played for the Schumanns were big and bold, and it was tempting to imagine what such genius might produce for orchestra.

Maybe given time and health, Robert could have helped Brahms give voice to a symphony. But Robert had neither time nor health. On 27 February 1854, while Clara was consulting with a doctor, Robert slipped away and jumped into the Rhine. He was saved by fishermen. Clara only caught a glimpse of him before he was taken to an asylum. The next time she’d see him would be two years later on his deathbed.

END_OF_DOCUMENT_TOKEN_TO_BE_REPLACED

The Schumanns, Symphonies, and Brahms, Part 1

The November Lark Notes consist largely of this three part essay, The Schumanns, Symphonies, and Brahms. Stay tuned for the rest. Enjoy, and remember you can buy your tickets to the Minnesota Orchestra Musicians’ performance of Brahms 2 here.

In early November 1853, a twenty-year-old Johannes Brahms read the latest issue of the music journal Neue Zeitschrift für Musik. On the front page was an article by Robert Schumann hailing him as the savior of music.

I have thought…someone must and would suddenly appear, destined to give ideal presentation to the highest expression of the time, who would bring us his mastership not in the process of development, but springing forth like Minerva fully armed from the head of Jove. And he is come, a young blood by whose cradle graces and heroes kept watch. He is called Johannes Brahms…

It had only been six months since Brahms had left his home in commercial Hamburg to tour Germany as an unknown accompanist. Only five weeks had elapsed since Brahms had met Robert Schumann for the first time, along with his wife, the radiant sad-eyed Clara, one of the greatest pianists of the nineteenth century.

The article that changed Brahms’s life

A few months later, in the wintry depths of February 1854, Robert Schumann threw himself into the Rhine. His effusions had been the precursor to a horrific mental breakdown. Robert himself asked that he be sent to an asylum for treatment; Clara was left behind pregnant and alone. In a rush of gallantry, Brahms came to her side. Suddenly he found himself de facto master of the house, stepfather to his idols’ children. Robert’s madness, and his extended stay in institutional purgatory, made possible arrangements that might otherwise have been looked upon askance. In the evenings, Clara and Johannes mourned their mentor by playing music, often Robert’s. To minds like theirs, sharing music is more intimate than sex.

This is the environment in which Johannes Brahms first seriously wrestled with the idea of writing a symphony. And people wonder why it took him so long to finish it.

END_OF_DOCUMENT_TOKEN_TO_BE_REPLACED

Once upon a time, in the halcyon days before September 2012, I thought of myself more as a historian and wannabe musicologist than as a commentator on never-ending orchestral lockouts.

Well, it’s been a year, but my heart’s still in the whole history thing. I’ve ignored it and I’ve missed it. I’m not giving up analysis of orchestral politics – by any means – but I do want to try to shoehorn some history onto the blog. 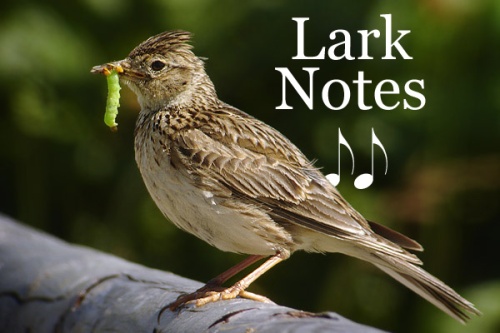 So what are Lark Notes? Great question. I’m not even 100% sure yet. (Let’s hear it for flying by the seat of your pants!! Woohoo!) I do know that the Notes will be my exploration of a particular musical topic, and that exploration might come in the form of essays, Youtube videos, interviews…who knows! We’ll have to see how the Notes evolve as time goes by. For the foreseeable future, they’ll likely tie into the programs of the Musicians of the Minnesota Orchestra.