Author Marie Lipsius: Because Not All Female Liszt Fans Were Shrieking Maniacs

These are the first two things we learn about Franz Liszt:

Historians (the vast majority of them male) revel in describing Liszt’s fangirls, marveling at every detail of their insanity. These women were hysterical, petty, irrational. They fought over his handkerchiefs, fashioned piano strings into bracelets, and even tucked his discarded cigar butts between their boobs. Their intense reaction to his performances even inspired a new noun – Lisztomania – coined by Heinrich Heine in the 1840s. Heine asked “a physician, whose speciality is female diseases” to explain why Liszt held audiences so spellbound. Predictably, the physician declared the phenomenon to be pathological, offering as explanation self-assured mumbo-jumbo about magnetism, electricity, and even musical cantharidin, I sh*t you not.

But let’s be real: Liszt’s female fans weren’t brainless bimbos. Contrary to the stereotype, many brilliant women fell into Liszt’s orbit for intellectual, emotional, or even spiritual reasons. We’ve read about a few of his protégés already, including virtuosas Amy Fay, Adele aus der Ohe, and Sophie Menter. But one of the most important Liszt fangirls was not a professional musician at all. She was a self-taught writer and historian who made important contributions to the nascent field of musicology, and her groundbreaking work still raises timely questions even today. Her name was Marie Lipsius, pseudonym La Mara.

END_OF_DOCUMENT_TOKEN_TO_BE_REPLACED

Tagged as How the f*ck did I not know this woman?, La Mara, Liszt, Marie Lipsius

Sophie Menter was a world-renowned pianist who lived in a castle and constructed chicken wire fences around her property to keep her many cats from escaping. If that sentence doesn’t intrigue you, then you’re on the wrong blog. 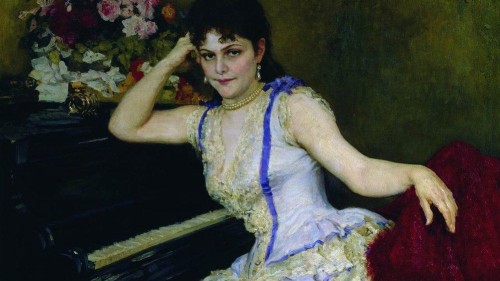 Sophie Menter, seen here not having time for your bull****.

Sophie Menter was born on July 29, 1846 in Munich. Her father was a cellist named Josef and her mom was a singer named Wilhelmine Diepold, who was so musically talented that the local prince offered to pay for her education (she declined, apparently because she wasn’t interested in pursuing a career).

Josef and Wilhelmine’s life together was a string of tragedies. They had nine kids, and most of them died young, but not before the older sisters had a chance to start teaching little Sophie piano. Sophie in turn taught her younger sibling, Eugenie. Eugenie became an accomplished pianist, as well; sometimes historians don’t know which fabulous Menter sister various old reviews are referring to.

It quickly became obvious that Sophie was incredibly talented, but her musical education was put on the back burner. Josef didn’t want his young daughter studying at a conservatory, and, more pressingly, he was terminally ill. He passed away in April of 1856 at the age of 48, when Sophie was nine. According to legend, he told his wife, “Mind, wife, you look to Sophie. There’s something in that child!” So, y’know, no pressure.

END_OF_DOCUMENT_TOKEN_TO_BE_REPLACED

Tagged as How the f*ck did I not know this woman?, Sophie Menter