The most comprehensive article online about trailblazing conductor Antonia Brico is this one, and it makes her sound very scary.

“She had this stern look on her face that could have melted parts of Greenland.”

She was a “horrid prima donna.”

“She knew how to maneuver people.”

“I loved that lady tremendously, but sometimes I could have wrung her neck.”

So when I cued up Judy Collins’s Oscar-nominated 1974 documentary “Antonia: A Portrait of the Woman,” I sat back and waited for a monster to appear.

Instead, I saw a quietly self-possessed woman standing in front of a rehearsing orchestra. When she speaks, she says tyrannical things like “eight after B” and then “diminish the quarters, please.”

After watching the whole documentary, I don’t doubt the imperiousness is there. (You need imperiousness to be the first woman to conduct the Berlin Philharmonic.) But Antonia Brico was clearly more than just a frustrating (and frustrated) manipulative genius Greenland-melter. She could also be self-deprecating, brutally honest, and hilarious. 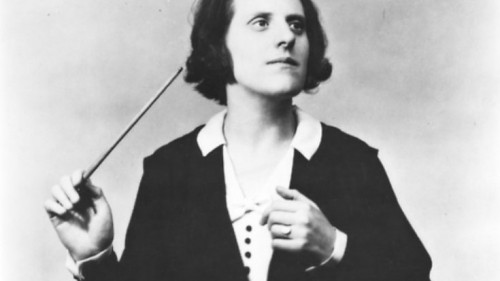 Antonia Brico was born in 1902 to an unwed teenager in Rotterdam. She was given up to adoptive parents, who emigrated to America as soon as Antonia’s birth mother tried to get her back. In a single sentence, Antonia captures the essence of her childhood: “I would sort of dream of having an automobile accident in front of somebody’s house just so they’d pick me up and be affectionate.”

When she was ten, a doctor recommended she cure her nail-biting by taking up the piano, which she fell in love with immediately. But later, after attending orchestra concerts, she recognized her true calling: to conduct. She felt so strongly about her destiny that she couldn’t let the lack of role models stop her. “I felt that I’d never forgive myself if I didn’t try.”

In 1923 she received her B.A. from the University of California at Berkeley, and in 1927 she became the first American to graduate from the conducting masterclass at the Berlin State Academy of Music.

In 1930 she became the first woman to conduct the Berlin Philharmonic.

A transcript from the documentary:

ANTONIA: On January the tenth, 1930, I conducted the Berlin Philharmonic.

JUDY COLLINS: What was the program?

ANTONIA: The program was the Dvořák symphony in d-minor, which I’m about to conduct here in Denver soon. And the soloist was a singer – supposed to be a singer singing a big aria of Beethoven. But she did something very strange; I don’t know if you want to hear about that.

ANTONIA: Well, strange in this way. She was crazy to be a great singer, but she studied and lived in Italy, and she had a lover in Italy. And this took place in January. And without telling me, she sneaked off to Milano to continue her love life with her…gentleman friend in Milano. And they – ahem, shall we say – were so energetic about it that she came back and lost her voice. That happens not to be very good for the voice, in case you don’t know that.

The Allgemeine Zeitung wrote of her debut, “Miss Brico displayed unmistakable and outstanding gifts as a conductor. She possesses more ability, cleverness, and musicianship than some of her male colleagues who bore us in Berlin.”

Later that year she conducted the San Francisco Symphony and the Los Angeles Philharmonic. She even raised the money to buy an opportunity to conduct the Musicians’ Symphony Orchestra at the Met Opera, becoming the first woman to ever conduct there. As Antonia tells it in the documentary, she was such a sensation that she was offered a second show, and then a third…but the third never took place because the (male) vocal soloist didn’t want to be upstaged by a woman.

No matter how hard she tried, she found it impossible to shed her identity as a female conductor. “Music and art have no sex,” she protested, to no effect.

So to prove her point, in 1934, with the backing of luminaries like Bruno Walter, First Lady Eleanor Roosevelt, and Mayor LaGuardia, Antonia Brico organized a symphony orchestra consisting entirely of women…and installed herself on the podium. The New York Women’s Symphony Orchestra aimed to promote the accomplishment and general badassery of female orchestral players to a skeptical public. For a period of several years, these women played four (generally well-received) concerts annually at Carnegie Hall. After that, Antonia felt they’d made their case, so she made moves to integrate the orchestra and hire men. The board felt she was sacrificing the organization’s prime comparative advantage, and not long afterward, the ensemble disbanded.

(There must have been something in the water in New York in the early thirties, because in 1932, a Belgian-American violinist and conductor named Frédérique Petrides founded the Orchestrette Classique, a New York chamber orchestra made up of women. They gave the New York premieres of several important works, including the Barber Adagio.)

In 1938, Antonia conducted the New York Philharmonic at Lewisohn Stadium to acclaim. Arthur Judson, the then-manager of the Philharmonic, observed, “All those females in the audience want to see a male conducting. Brico, you were born 50 years too soon.” His timeline was spot-on: Antonia was 54 when Marin Alsop was born.

The Westword article quoted above posits that Antonia’s professional stagnation was due to an abrasive personality. Perhaps, but I also wonder how far she would have gotten without that strong will. She came close to winning a position with the Denver Symphony Orchestra (she even relocated to Colorado to woo them), but in the end, they hired someone else. So she founded the Denver Businessmen’s Symphony, later re-named the Brico Symphony, and she led it from the 1940s to the 1980s. At their first concert, they received a congratulatory telegram from her fan, Jean Sibelius.

Antonia Brico may have died in 1989, but she was immortalized in the documentary Antonia: A Portrait of the Woman. Nowadays you can rent or buy it on Youtube. And the Brico Symphony, nowadays known as the Denver Philharmonic, still plays.

After learning about Antonia Brico – seeing vintage newsreel of her conducting – hearing her describe her astonishing career – and reading about her boundary-breaking performances with major orchestras, as well as with her own orchestras…I find myself asking yet again:

How the f*ck did I not know this woman?

Enjoy this article? You can support this series of entries on forgotten female musicians for as little as $1 a month on the blog’s Patreon page. The next installment – a profile of Frédérique Petrides – drops on August 9th!

Tagged as Antonia Brico, How the f*ck did I not know this woman?