Industrialist Joseph Heinrich Mayer met Seraphine Sebrechts when he hired her to be his invalid first wife’s musical companion. After the first Mrs. Mayer died, Seraphine became the second, and in 1903, the newlyweds had a daughter named Frédérique Mayer.

“Be glamorous AND trailblazing AND aristocratic AND badass? I believe I can do that.” – Frédérique Mayer Petrides, probably

Riki (as she was nicknamed) seized every privilege of her upbringing, throwing herself into her studies with aplomb and enrolling at the Royal Conservatory in Brussels. (She had seen how her pianist / composer / painter / photographer mother’s talents had been suppressed, and she was determined not to let her own go to waste.) In 1923 Frédérique emigrated to the United States, where she began pursuing her penchant for conducting at New York University.

A decade later, in 1933, she and her journalist husband Peter Petrides decided to found a women’s chamber orchestra: the Orchestrette Classique. Peter was named the Orchestrette’s manager and publicist, while Frédérique became its music director.

The name “orchestrette” was slightly tongue-in-cheek, and it held multiple layers of meaning. The “-ette” suffix signified not only a feminine ensemble, but a small one. In contrast to Antonia Brico, who was assembling a full-sized symphony orchestra of women at this exact same time, Frédérique was deliberately cultivating a chamber orchestra, and for a variety of savvy reasons. Artistically, she was most interested in performing works from the classical and baroque eras; financially, she knew that a smaller orchestra would be easier to sustain; and practically, even as late as the 1930s, there was a shortage of professional female wind and brass players, and Frédérique wanted to avoid forcing male musicians to wear wigs and dresses. (And yes, deceptive cross-dressing was apparently an honest-to-God thing that happened in women’s orchestras in the early twentieth century.)

However, Frédérique, chronic overachiever, didn’t stop there. In 1935 she and Peter also established a newsletter called “Women in Music,” whose mission was basically to ask, “why the f*ck do you not know about these women?”, only in a more genteel way. Its tone of polite but impatient incredulity is a thing to behold: 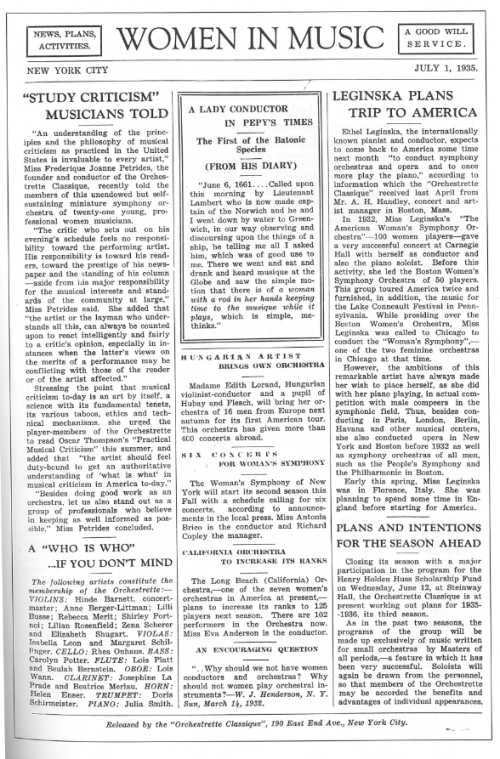 There’s so much to love here:

Frédérique herself later described why she and Peter started the Women in Music newsletter:

I wanted the members of my Orchestrette to know that they were part of a tradition that went back to ancient Egyptian and Greek times.

(It was after reading Frédérique’s words that I wondered: well, who started the whole women’s orchestra thing anyway? And that, my friends, was when I found out about Josephine Amann-Weinlich.)

Interestingly, it turns out that more people than just the Orchestrette members wanted to read “Women in Music.” At the peak of its circulation, 2500 copies per issue were mailed out, many to libraries and institutions, where the stories within served to inspire scores of music lovers.

(If you’re interested in reading more articles from “Women in Music,” they were reprinted in a 1994 book called Evening the Score which is, as of August 2017, available through Amazon for $4.99.)

“Women in Music” continued for five years until the demands of parenthood resulted in the Petrides scaling back their advocacy activities (Peter and Frédérique had a daughter in 1938).

The Orchestrette Classique, seen here not having time for your bull**** misogyny

The Orchestrette, however, continued. And because advancing the interests of womankind via orchestra-founding and newsletter-writing wasn’t quite heroic enough, Frédérique also decided to add “contemporary music champion” to her resume. In 1935 she programmed a piece by pianist and Orchestrette founding member Julia Smith called Syrtos. This programming appears to have sparked an interest in presenting contemporary American composers. So in addition to its performances of baroque and classical masterworks, the meticulously curated Orchestrette also delved into modern works, performing pieces by Warlock, Copland, Diamond, Menotti, and others. Barber’s Adagio for Strings actually received its non-radio New York premiere under Frédérique’s baton. Realizing that they were developing a reputation that went beyond the mere “classique”, in 1941 the ladies decided to rename themselves the “Orchestrette of New York.”

The Orchestrette disbanded in 1943. More lucrative jobs in integrated ensembles were opening up for women as male musicians left to fight overseas. The antagonism that many professional women had faced during the Depression – when it was believed that any available job should go to a man – began to soften, ultimately rendering the work of the Orchestrette less relevant.

Frédérique described the reasons behind the dissolution this way:

I didn’t want to stand in the way of the girls’ advancement, and it would have been difficult to find replacements for them right away. Besides, at the time the idea of preserving and fighting for a women’s orchestra seemed so insignificant in the face of a world war and the daily reports of the many terrible tragedies.

Frédérique continued her important work, although there’s not much information online yet about her post-Orchestrette career. This fabulous thesis by Katherine Elizabeth Ramsey (the main source I used writing this entry) says

Petrides’s intention was never to create a permanent women’s orchestra, instead she sought to cultivate a musical ensemble that operated beyond the boundaries that hindered female musicians. Just as many of the Orchestrette’s members moved on to positions in major orchestras, Petrides continued to enjoy a fruitful conducting career, leading several mixed-gender orchestras in the New York area, including the Carl Schurz Park Concerts, the West Side Orchestral Concerts, and the ensemble that would become known as the Hudson Valley Symphony Orchestra.

According to Wikipedia, the West Side Orchestral Concerts were referred to as “the Tanglewood around the corner” and attended by thousands.

After a long, full life of music-making, Frédérique Petrides passed away in January of 1983 in New York.

After reading about Frédérique Petrides – learning about her championing of female musicians – applauding her support of contemporary composers – and reading her and her beloved husband’s sassy newsletter about women’s history…I find myself asking yet again:

How the f*ck did I not know this woman?

Enjoy this article? You can support this series of entries on forgotten female musicians for as little as $1 a month on the blog’s Patreon page. The next installment – a profile of Josephine Amann-Weinlich – drops on August 23rd!