I haven’t spent much time digging into the Atlanta Symphony cluster**** yet because this weekend I was in the Twin Cities celebrating. Thanks to two solid years of hard work by many hundreds of people, combined with copious amounts of luck and an extensive housecleaning at the top of the organization, the Minnesota Orchestra is finally turning a corner. It’s an unqualified miracle. On Saturday I was in the midst of a midnight conversation over ice cream with some dear lockout friends, sitting outdoors under the sparkling moon and laughing, feeling profoundly profoundly grateful for everything, when one of my fellow activist audience members pulled out her phone, checked Facebook, and read the Atlanta Musicians’ press release. We’d all known it was coming, but it didn’t make it any easier. Our smiles faded, and expletives were uttered, loudly. It was the only asterisk of unpleasantness in an otherwise magical weekend of celebration.

So I read what I could between parties, and have been trying to get up to speed today. Because I’m invested in this thing – and if you love orchestras, you should be, too. The Atlanta musicians’ fight is our fight, just transplanted to a different city, like some kind of dangerous airborne mold spore, or maybe an STD. As it was in Minnesota, Facebook is turning out to be an invaluable clearinghouse of information that is often more detailed and more valuable than the “he said, she said” summary of events in traditional print media. My friend and Save Our Symphony Minnesota volunteer Elizabeth Erickson advised in a comment to a post on the Atlanta musicians’ Facebook page, “Yes, start digging for financial dirt… Get pro bono lawyers and accountants on board to review 990 tax info; be vocal about what you find…” Yup. And under the Atlanta musicians’ Facebook page, under a link to Kevin Case’s recent excellent article, Kathy Shaw Amos wrote a comment about bonuses.

My eyebrows immediately raised. Bonuses to a CEO of a financially troubled orchestra right before a brutal musician lockout? This movie played for a while in Minnesota. And if I’m remembering correctly, it didn’t end well…for the CEO.

So I took the, y’know, two minutes it takes to fire up Guidestar.org, download some Woodruff Arts Center documents, and check to see if Kathy Shaw Amos was right. Two minutes I’m assuming the non-blogging media should have, which they apparently don’t. Did nobody learn from Minnesota that the first step is always the 990s? The first step is always the 990s. Check the first one out here, and scroll down to page 40.

At the top of the form, you can see that the Woodruff Arts Center fiscal years start on June 1st and end on May 31st. The most recent form available dates from the year extending from 1 June 2011 to 31 May 2012. The Atlanta musicians’ lockout occurred in the autumn of 2012, when ours did. So this is all pre-lockout.

What this says is that Dr. Stanley Romanstein, the Atlanta Symphony President, took home $335,344 in base compensation, with a $45,000 “bonus and incentive” compensation, plus $26,403 in untaxable benefits, bringing his compensation that year to $406,747. That begs the question: bonus and incentive compensation for what? It would be one thing to hand out bonuses to executives who are leading orchestras in good shape, but not ones so fiscally and morally dysfunctional they’re about to lock out the creators of their product.

For those of you who are just joining us, I asked similar questions back in October 2013, when I found that former Minnesota Orchestra CEO Michael Henson took home $619,313 in compensation, including two separate $100k bonuses meant for fiscal years 2011 and 2012. This scandal turned into what we in the Minnesota scene ended up calling “Bonusgate.” The Minnesota Orchestral Association tried, but ultimately failed, to suppress community outcry. It was one of the major developments that eroded donors’ trust in Henson so severely that a mere six months later he…..”resigned.” By the end of his tenure, he was unable to attend a Minnesota Orchestra concert without hearing pissed-off patrons yelling before performances, “Fire Henson!” It got to the point where I heard rebellious Minnesota audiences joking about whether or not it was legal to “yell fire Henson in a crowded auditorium.” (Heh.) Is this the kind of impotence that Stanley Romanstein aspires to? Or is he just hoping that Georgian audiences are dumber than Minnesotans?

So back to Atlanta. Other management members took home bonuses that year, too. Clayton Schell, currently the Vice President of ASO Presents according to the Atlanta Symphony website, took home a $20,000 bonus that year. Michael Shapiro, the Director of the High Museum of Art, took home a $30,000 bonus, pushing his total compensation to the low $700,000s. (The High Museum of Art and the Atlanta Symphony are connected via the Woodruff Arts Center.)

Will these bonuses mean the difference between a deficit and a surplus, between fiscal strength and weakness? Well, no. Do I begrudge these folks their bonuses? Well, not…automatically. But as we saw in Minnesota, where there’s smoke, there’s fire. Bonuses being tossed out so liberally by a non-profit as its orchestra is running massive deficits and contemplating locking out its employees certainly suggests that Hey, Y’Know, There Might Be More To This Story! And troublingly, that “more” might not show up in the 990s. Bonuses in times of financial trouble also bring up legitimate questions about the wisdom of the Woodruff’s and the ASO’s expenditures. Are bonuses for an orchestra CEO really the most responsible use for that particular $45,000? Is giving the CEO bonuses and incentive pay really the best way to advance the mission of the organization? My trust in this leadership team is eroding rapidly. And as we in Minnesota know, when the public can no longer trust a non-profit to wisely carry out its mission, said non-profit is doomed, until its course changes. New business model, old business model, “contemporary operating model”: Minnesota proved that no model can be successful without trust and transparency between all stakeholders.

I’d like to stop there, but unfortunately, the craziness continues. Jump back another year to find even more bonus insanity. This comes from the fiscal year lasting from 1 June 2010 and ending 31 May 2011. (Check out page 31.) There are bonuses sprinkled throughout, but notice Dr. Romanstein’s special accomplishment: 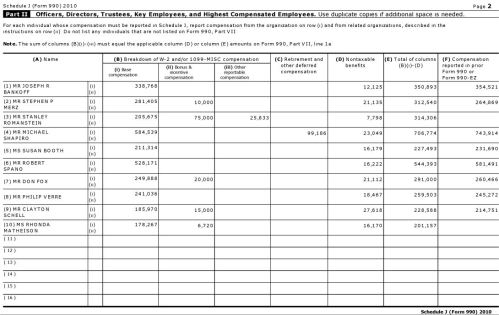 Yes, he was apparently sooo amazing at running an orchestra in crisis that he earned $75,000 in bonus or incentive pay!

And then, as the info-mercials say: but wait, there’s more!

Yes, back in the pre-Romanstein days, in the fiscal year lasting from 1 June 2009 to 31 May 2010, former Atlanta CEO Allison Vulgamore took home $169,101…in incentive and bonus compensation alone. Her total compensation that year totaled nearly $600,000. Check out page 28. Perhaps this had something to do with the fact her tenure was ending, but…I don’t really care. It’s still a bonus. Paid to a CEO. Leading an orchestra. That was in such dire straits. That a few years later. It purportedly had no other choice. But to lock out its players.

(I guess we should be grateful the direction of the bonuses are gradually trending downward…?)

What the HELL, guys? Are you running a non-profit or a shell corporation with an in-house orchestra? What are these bonuses for? Why were they given? How could Stanley Romanstein accept them in good conscience, knowing it was possible – if not likely – that he would be locking out his players in a few months’ time? Does your entire board know about them? Do your audiences know about them? Do your donors know about them? How did these bonuses advance the mission of your organization? What kinds of bonuses are you paying Stanley Romanstein nowadays? As you were preparing for your second lockout in as many years, did you happen to glance to the north and see that these kinds of tactics got the organization nowhere? Are you consciously modeling your strategy after the one that failed so miserably in Minnesota (if so, WHY?), or are you just so dangerously oblivious you haven’t noticed the similarities?

If Stanley Romanstein and the leaders of the ASO and the Woodruff can’t answer these questions, they are not worthy of leading one of this country’s great orchestras. But judging by what they’re saying to the press now, it will likely take the determined long-term hammering of a lot of music lovers before they get the message.