To my intense irritation, the media played up our gathering like they were expecting a second Haymarket Riot. The New York Times sported the headline MINNESOTA ORCHESTRA PLANS GALA; DISSONANCE IS EXPECTED. One local television station warned of an upcoming “tense protest.” WCCO called it “a situation.” People on Facebook said that things could “get ugly.” A politician even Tweeted that he was excited to mock us. It was ridiculous, especially since I’d sat in on conference calls with my fellow SOSMN volunteers, and I’d heard firsthand how they’d spent untold hours planning the event and mapping out messaging. They could not have made it any clearer in their media advisories and press releases that this was meant to be a peaceful celebratory rally led by audience advocates. Of course, this angle was the focus of approximately none of the mainstream media’s coverage.

Jon Stewart once said in an interview:

The bias of the mainstream media is toward sensationalism, conflict, and laziness.

There may be something to that.

I chose to wear evening dress (albeit with leg warmers, two layers of socks, and long underwear). After I got dressed, a friend brought me to the hall, and my mom and I walked around the block, taking in the scene. A large crowd had already gathered around Peavey Plaza, which looked like a combination circus, prison, and ShopKo garden center. There were tents, guards, and shrubberies. A tented sidewalk extended out from the hall’s main entrance, made a sharp turn to the left, and drained down to the empty Peavey Plaza fountain, which now was the location of a Symphony Ball tent, in which exciting activities would no doubt take place (dinner? dancing? dozing?). The tents didn’t have any windows, but there was a plastic French door on the Twelfth Street side that bravely attempted to add elegance to the proceedings. Generators buzzed near the sidewalks with massive cords leading into the great white tent. What were they for? Lighting (a blue hue eventually began glowing from the ceiling)? Heaters? A DJ booth? Endless possibilities! Parked next to the generators were trucks full of wine bottles. Caterers were unloading them. They were dressed like stewards on the Titanic.

A cluster of musicians and their supporters were gathered by the loading dock, bright and upbeat. Their happiness was contagious. Unfortunately, to my great sorrow, I’d missed Orchestra CEO Michael Henson’s grand entrance into the building. (Tellingly, it hadn’t been through the front door…) Henson had arrived in an expensive vehicle. Bodyguards with earpieces had escorted him up the ramp. His entourage got to the door – and then, in a brief unforgettable moment, Mr. Michael Henson was…locked out of Orchestra Hall.

I need a moment to savor. Thank you.

(In case you’re wondering, Wells Fargo VP and MOA board chair Jon Campbell also came through the back entrance… US Bancorp CEO and chair of management negotiating committee Richard Davis was slightly less paranoid; he passed the SOSMN welcome delegation in the skyway. He didn’t make eye contact with anyone, though.)

My mom and I continued rounding the hall, peering in the few windows that weren’t darkened. When we came to a window that wasn’t blocked, we waved enthusiastically at an employee within. Being a human, she reflexively waved back – then, once she realized that we were not Ball-goers, she quickly stopped and turned away, embarrassed at her mistake. We stumbled down the sidewalk laughing at the sheer absurdity of the entire situation.

The windows along Eleventh Street had been draped with some kind of material, presumably to shield ball-goers from having to make eye contact with the rabble. Shelves floated inside the hall about seven feet above the sidewalk. There were items placed on the shelves, perhaps from the silent auction…? Sadly, there was no online catalog, like there was during the 2012 ball, so I am unable to comb through it for giggles. Last year, Jon Campbell’s generous silent auction donation was a lunch with himself (value: $250). There’s a part of me that genuinely admires the chutzpah of this. When the 2013 Symphony Ball was initially soliciting for donations in the late summer, I contemplated sarcastically donating dessert with myself (value: $10), but I never did. I wonder if Mr. Campbell repeated his gesture this year… 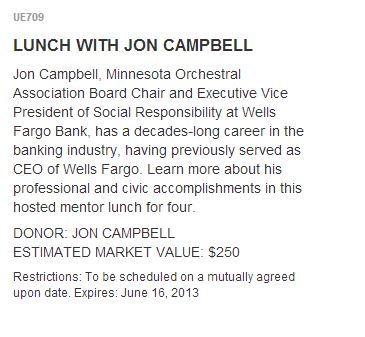 An actual entry from the 2012 Symphony Ball auction catalog

The sidewalk along Eleventh Street was lined with rented arborvitae that were maybe five feet tall. I was a little disappointed in the height. Personally, I was hoping for something a little more dramatic – a little more Downton Abbey-y – but alas. I suppose perhaps the selection of rental shrubbery is limited. I’m curious how much the shrubbery rental contributed to the Minnesota Orchestral Association’s FY 2014 deficit, or if a special shrubbery donor was located. If so, will they be featured in October’s Showcase magazine?

“Well, this is weird,” I said to no one in particular.

We had music throughout the rally, provided by all sorts of ensembles. My favorite part was how the music was for everyone. (Whether you wanted that music or not…) At one point, an assortment of brass players (including some locked out musicians) gathered together and played in the plaza. Out of nowhere came a torrential downpour. We shuffled beneath trees and the covered bus stop. Umbrellas sprouted from the crowd like mushrooms. I stood out in the rain for a while, threw caution to the wind, and let my hair frizz. There’s something about being in the rain in a satin gown, listening to your locked-out heroes on the south end of Nicollet Mall, that’s ridiculously exhilarating. Despite the weather, the music played on and the crowd didn’t leave. It was a powerful moment. And after the rain stopped, we continued our party with even more joy than before.

MinnPost later reported in a fabulous photo essay that the 86-year-old founder of Greater Twin Cities Youth Symphonies was kept by the MOA’s security from seeking refuge from the rain under their tented sidewalk. The tented sidewalk was reserved for Ball attendees only, even in the case of rain. I think this anecdote is telling.

At some point during the evening, the group Belladiva took the stage at Orchestra Hall. Other bands had turned the Symphony Ball gig down, and obviously the symphony wasn’t there. (Why would a symphony be at a Symphony Ball, anyway? Pfft.) No video footage of the performance has yet surfaced. Therefore, we can only imagine what Mr. Henson, Mr. Campbell, and Mr. Davis’s reactions were to this:

Around eight o’ clock, the promenade to the tent began. Through the glass to Orchestra Hall, we could see ladies in gowns clustering around the door, smoothing their skirts and looking uncertainly at one another. In response, we musician supporters eagerly lined the MOA shrubbery to watch the fashion show. Then ball-goers began coming out of the hall two by two, walking down the covered sidewalk. Their body language was very closed, although whether from the cold or embarrassment (or both), I couldn’t tell. The whole thing was out of the prom scene from Twilight, down to the rain, awkwardness, and twinkling lights.

THANK YOU, we shouted. We wave glow-sticks and signs over the bushes. PLEASE END THE LOCKOUT. BRING BACK THE MUSIC. I LOVE YOUR DRESS. Firetrucks rushed down Nicollet Mall with blaring sirens. ENJOY YOUR DINNER. The Band of Praise played “When The Saints Go Marching In.” WHO ARE YOU WEARING? Horns honked in support from Eleventh Street, drowning out our shouts. THANK YOU FOR YOUR GENEROSITY. MUSIC TO THE PEOPLE. END THE LOCKOUT. Toot toot.

Despite our cheers and “thank you”s, hardly any of the guests made eye contact. There were a lot of gentlemen who were suddenly very interested in their watches, and a lot of ladies very taken by their handbags. A lot of women clung very tightly onto their dates’ arms. Some of us wondered out loud what they’d been told and if they’d been warned of the possibility of a rowdy mob; they were acting like it. But finally toward the end of the promenade, one man actually looked at us and waved. We roared our appreciation. I also heard that one woman stepped out of the hedges to say hello. That was encouraging.

Osmo was conspicuously absent from all grand marches, skyways, and loading docks.

My mom, our friend, and I were the last ones out of the rally. By the time we finished talking and saying our good-byes to everyone, it was late and the plaza was empty. Up in the second tier of the Orchestra Hall lobby, we could see pulsating lights that would be at home in a trendy club. The colored beams whirled out onto the sidewalk. They were so bright we had to cover our eyes.

The joy and surreality that was the 2013 Symphony Ball