Some Observations on Charts

I’ve been studying the Minnesota Orchestral Association’s 990s that Drew McManus so generously released to the public in late November. If you’re remotely interested in this conflict, and have no life, they’re great fun to dig through. (Want to know what the President of the MOA was paid in 1999? Want to know how wildly income from grants and contributions has varied over the years? Want to know how much the MOA pays Vengerov or Ma? The 990s will tell you.) I’m hoping that Mary might comment on the “vintage” 990s at some point, whether on this blog or in another public space, but in the meantime, I wanted to point something out.

Last night I was constructing some charts for my own personal use, and fiddling with this kids’ graph-making website, when I realized something no one had ever taught me: charts are wildly subjective.

Back when I was in school, I was taught how to read charts and interpret graphs. Because they included numbers, and because numbers are always advertised as Objective, I assumed that charts and graphs were relatively objective, too…that I could take them at face value. But nobody ever showed me how easy it is to write bias into a chart. If someone wants to push a pre-ordained narrative, they can build a chart to reflect that narrative. Change the context of numbers, and voila! watch them suddenly mean something completely different.

Let me show you what I mean.

Exhibit A: a perfectly innocent chart from page ten of the Minnesota Orchestra’s much ballyhooed Strategic Plan.

That is a scary chart. For one, it makes the MOA look like they made projections as inaccurate as Dick Morris predicting a Romney landslide. But that’s not what I wanted to focus on today. Instead, look at the y axis (the vertical one, for those of you who zoned out in math class). Notice its range: $100 to $240 million.

Oh. Maybe we’re not quite as doomed as we once thought…

Believe it or not, these two graphs express the exact same values. All I did was change the numbers that appeared on the y axis. That’s it. Don’t get me wrong; the MOA’s projections still aren’t very accurate. But instead of Dick Morris’s Romney landslide, those projections start looking more like Karl Rove predicting that Romney would win in a “squeaker.” Obviously, this second chart doesn’t strike the same instinctive impression of terror and helplessness.

Just for fun, here’s a third incarnation of the chart. Once again, same numbers; just a different y axis.

Hey, we’re not doomed at all.

Yes, change the y axis again, and you can make the difference between the assumptions and the reality look like something that could be solved by looking for change between couch cushions.

Want another instance of this phenomenon? Try page ten of the Strategic Plan again… 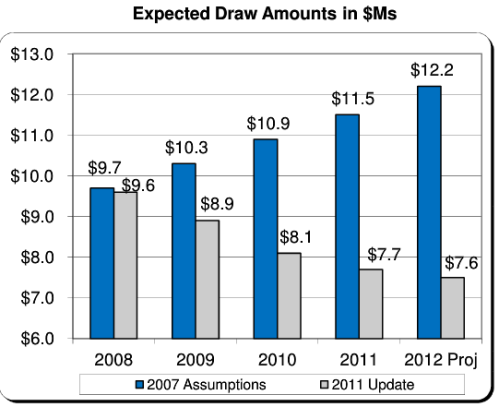 Notice they did the same thing here: they started the y-axis at $6 million, instead of zero. So let’s tweak the y axis again. Remember: I’m not changing any values in these charts. The information is exactly the same; it’s just the context that changes.

Once again: still bad. But not as bad as the first chart.

So. Why did the MOA choose the weird y-axis values that they did? Excellent question! Any observer knows the answer: the Minnesota Orchestral Association is obsessed with manipulating the facts to tell – no, to sell – a pre-ordained narrative. And unfortunately, that narrative is not always tethered to reality. We’ve seen this time and time and time again from them. If they pulled these kinds of juvenile tricks with their charts in the Strategic Plan, imagine what they else they’ve done with more complex calculations.

Someone from the outside need to come in and dispose of all the pre-ordained narratives. Dispose of management’s; dispose of the musicians’; dispose of the public’s. To continue with the political math analogy, we need someone like Nate Silver, who can absorb all the relevant numbers, adjust for bias, and come up with useful and accurate information tailor-made for this specific situation.

Fitzgerald said, “Show me a hero and I’ll write you a tragedy.” I say, “Show me a pre-ordained narrative and I’ll make a chart to support it.”

5 responses to “Some Observations on Charts”