Yesterday was quite the day: the Young Musicians of Minnesota made metro-wide news.

Yeah, unbeknownst to the locked out Minnesota Orchestra musicians, the Young Musicians of Minnesota brought their instruments to Nicollet Mall to play a concert of Tchaikovsky 4 in front of US Bancorp. Their mission? To send a message to Richard Davis to end the lockout of their mentors and heroes. YMM members deliberately didn’t tell the musicians what they were up to. I’m sure there are rumors floating around the upper floors of US Bancorp and Wells Fargo that those damn musicians put ’em up to it, but to believe that would be to succumb to the worst kind of cynicism. (Hear that, Minnesota Orchestral Association monitors? Good.) Sadly, Richard Davis didn’t acknowledge the crowd, nor did he send anyone down to say hello, but they did get an awful lot of attention on the Mall. 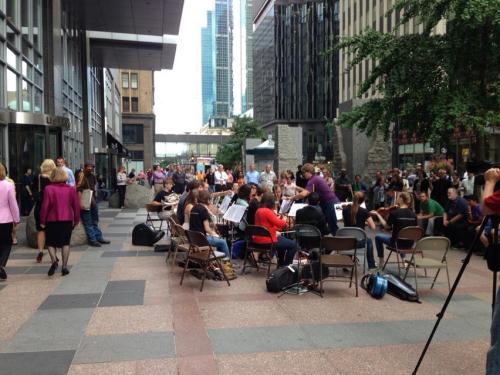 Some of YMM at the US Bancorp gig

I couldn’t be there, but I was tipped off about the show beforehand, and so I shooed some dedicated Twin Cities Larkers to downtown Minneapolis, and I heard a couple reports of how the afternoon went. Well it turns out there was press there, and US Bancorp couldn’t really do much about any of it except watch uneasily and talk to people on cell phones.

Consequently the following three videos aired last night on KSTP at 4:30, 6, and 10. Kudos to YMMer Emily Green, who has more composure in a major interview than any other teenager I’ve ever seen.

I did notice, though…. There’s something in the first video that got snipped out of the second two. See if you can spot it!