Nope, it wasn’t a lockout concert (although it felt like it). Rather, it was the first show in the Minnesota Orchestra’s 2015 American Voices festival, a massive extravaganza held Friday night at Orchestra Hall. How massive was it? So massive that the ushers told us anxiously and individually as they scanned our tickets: “Intermission is only fifteen minutes.” Aww, yeah. This is my kind of concert.

The show – and it really was a show – opened with Bernstein’s Divertimento. Sassy, sassy, saucy. As the piece went along, the classical trappings of the instrumentation kinda clattered away, and by ten minutes in, it felt like we were in a classy 2000-seat strip club. The hams in the brass section were milking the Blues movement for every single penny it was worth. Maybe even a few pennies’ more. During this section, I noticed a violist or two glancing over at the brass with a raised eyebrow. I can’t tell if they were skeptical or just jealous. 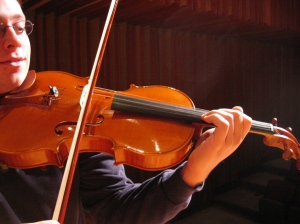 We can’t really pull off the strip club vibe with this.

Next came the premiere of Steve Heitzeg’s American Nomad trumpet concerto, written for Minnesota Orchestra musician Charles Lazarus. It was a huge hit in the hall, and the Strib wanted to marry the piece and have its babies. I’m sincerely glad it was loved. But my own personal feelings were more ambivalent. I was discontent throughout the opening. The abundant movement, paradoxically, struck me as frustratingly static. The middle movement was more successful, its pale, sparse scoring gorgeous and affecting. The written part of the third movement struck me as rather stale and routine…until the improv started, and then it exploded to life. In general it felt like music you’d use for a Copland documentary if the original Copland was still under copyright. But of course your mileage will vary. I was definitely in the minority. And as I’ve said on the blog before, I think Heitzeg’s soundtrack absolutely made the unforgettable PBS documentary “Death of the Dream.” I have no ax to grind.

Also, here’s a shout-out to Charles Lazarus. I know nothing about jazz, trumpet, or jazz trumpet. But what a mesmerizing soloist he was, in a very understated Minnesotan way. He has the aura of a grown-up band geek, with the haircut and glasses. His stage presence combines a cool modesty and a steely confidence, and he was such a treat to watch.

But. Let’s face it. The inevitable highlight of the evening was always going to be the return of former Minnesota Orchestra clarinetist Burt Hara to play the Copland concerto. END_OF_DOCUMENT_TOKEN_TO_BE_REPLACED