How The F*ck Did I Not Know This Woman?: Edith Lorand

How The F*ck Did I Not Know This Woman?

Also if you’re like me, the instant the idea of Flapper André Rieu occurs, you feel an intense longing to know her.

It’s easy to imagine her biography.

She would have a first-rate musical education, preferably at the same hallowed institution that trained Stefi Geyer and Béla Bartók.

She has to have a killer bow arm. That’s non-negotiable.

She has to take the nascent recording industry by storm. Ideally she’d be labeled the “female Johann Strauss” by the press.

She should also make an escape from fascism, for maximum biopic potential.

She needs a Mercedes.

She has to be the first female conductor to wear bright colors while conducting.

And OBVIOUSly she needs a backup band of ALL MEN. It is also very important that they be advertised as “EDITH LORAND AND HER ORCHESTRA OF SEVENTEEN MEN.” Again, this is very important to me.

But of course, she would also have to be fictional, because surely such a woman, had she existed, would be remembered today.

Well, a rare round of applause for sexism, because without it, you’d never have the delightful surprise of being introduced to the underappreciated Edith Lorand.

Let’s take a moment to analyze this video, second by glorious second:

Speaking as someone who loves fashion history, I applaud her choice of dress. This shape was comically out of fashion in the 1920s, but is synonymous with the era of Strauss waltzes. Costume kudos, Edith Lorand. 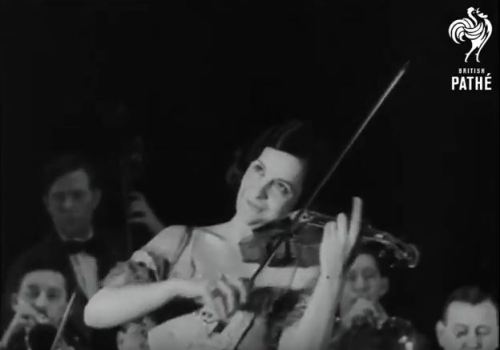 Meanwhile, this cellist appears to have lost the will to live

Edith Lorand doesn’t have a Wikipedia page in English, because…reasons. But we do have this page that Google has helpfully translated from German.

She was born on December 17, 1898 in Budapest and died in November 1960 in New York. She studied with Hubay and Flesch, proving she possessed some serious musical chops. In 1920 she made her Viennese debut and also “relocated her food point,” according to the aforementioned Google translation. In 1921 she began to make recordings. Before she turned thirty, she had made a thousand of them, and had her picture taken in this hat in her Mercedes, causing all subsequent generations to develop massive crushes:

All worship at the dancing feet of our waltz queen, Edith Lorand

That website also includes the following quote from a London newspaper, dated April 1930:

Should Johann Strauss, the Waltz King, come back to life, he would find a female rival in Edith Lorand, the Hungarian violinist. It is unusual for Germany to see a beautiful, slender young woman in a richly embroidered, white Hungarian dress climb the conductor’s desk and to face an orchestra of men in a covered, black evening dress. There have already been occasionally female conductors here – Ethel Leginska from London five years ago; Antonia Brico from Berkeley, Cal., This winter. But they insisted on wearing black suits. Edith Lorand relies on bright colors. No female conductor has so far tried to be a conductor and a soloist.

Thank God that Edith Lorand was given the chance to emigrate to America before World War II engulfed Europe. Her life was spared, but unfortunately her career never took off here like it had abroad. Further wild-eyed multi-tabbed Googling hasn’t revealed much else, but to be fair, I’ve also only known about her for, like, the last hour.

So head over to Youtube and type in Edith Lorand. There are dozens of really great old recordings to enjoy, full of the best kind of vintage schmaltz. And if you want a taste of her silky solo sound, thrill to this second movement of the Mendelssohn violin concerto. It’s pure antique bliss.

Plus, here’s an image from the Duke University website…

An orchestra of seventeen men, led by a flapper violinist conductor, playing San Francisco’s gayest music? I am so there.

After reading about Edith Lorand – hearing her play – reading about her contributions to the art of recording – realizing that she might be an important figure in the history of female violinists and conductors – and seeing she doesn’t even have an English Wikipedia page devoted to her…I find myself asking yet again:

How the f*ck do I not know this woman?

Tagged as Edith Lorand, How the f*ck did I not know this woman?, Women Violinists

8 responses to “How The F*ck Did I Not Know This Woman?: Edith Lorand”