This morning the Minnesota Orchestra bid farewell to cosmopolitan Helsinki and traveled north to Lahti, Finland. The first bus left earlier in the morning; the second, closer to concert time. If a musician took the early bus, he would have more time with the instrument he hadn’t seen since the night of the 16th, as well as a chance to over-practice and over-think. On the other hand, if she took the later one, she might feel rusty or rushed. It seems to me that without adequate mental discipline, the timing of either bus could encourage musicians to play mind-games with themselves.

Once again, since I’m not an official member of the touring party, I was in charge of my own transportation. Once again, the train was an affordable and delightful alternative. (In Finland, taking the train is actually faster than taking the highway. It’s quite satisfying to speed past the cars on the road next to you.) Bass player Bob Anderson is a train enthusiast, so we took the trip north together, chatting all the way. He used to teach at UW-Eau Claire, where my youth symphony rehearsals were held back in the day, so we had a lot to talk about. Appropriately, the landscape out the window was similar to the commute between Eau Claire and Minneapolis. For a moment, it was almost possible to trick myself into thinking we were back home. (Except in a bizarro universe that offered basic regional transportation.) 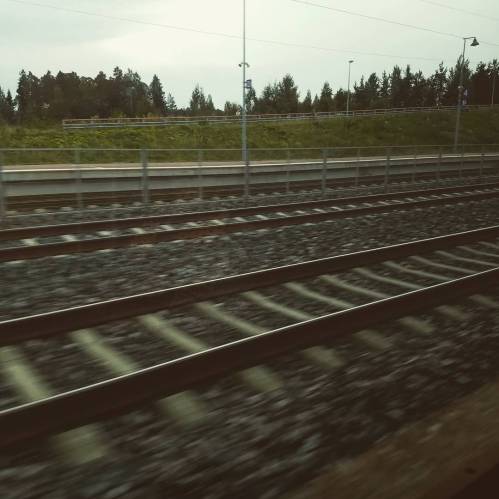 We wound up in Lahti with a comfortable amount of time to spare. It was a ten minute walk to the hotel, and Bob did the gentlemanly thing and rolled my suitcase for me. From there, we wandered the city looking for a lunch spot. Which was easier said than done; there were fewer English signs in Lahti than there were in Helsinki. The first open place we found sold pizza and kebabs, and had a miniature salad bar tucked next to the counter. The entire menu was in Finnish. Bob asked if they had a menu in English. They didn’t. I couldn’t help laughing while taking in the dizzying strings of consonants and double vowels, so acutely aware of my lingual ineptitude. I might as well have thrown a dart at the wall. Finally I said, “I’ll have what he’s having.” 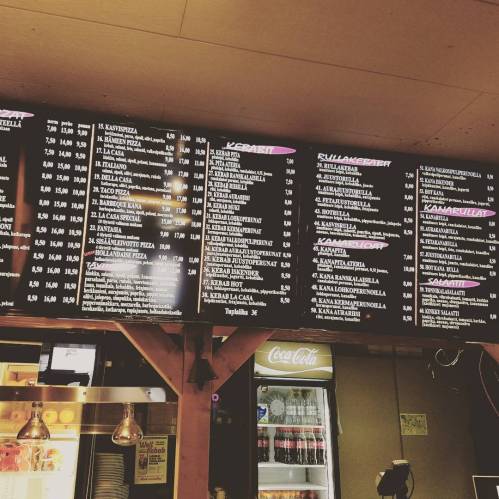 What would you have gotten?

The man who took our order was from Syria and studying chemical engineering in Finland.  He spoke perfect English. I’ve worn the privilege of my Americanness uncomfortably several times on this tour so far, but never as intensely as in that moment. Later, a cook came out with our orders. We asked about water. He spoke no English. Another man came out and pointed to the portion of the miniature salad bar that was refrigerated; there was a pitcher of water hiding behind the dressing. Finally we exchanged “Kiitos! Kiitos!”, the one word we all knew, laughing.

(Random side note: There are two things I’ve been missing deeply about America. The first is obviously my fluency in the culture’s dominant language. The second is the total lack of ice water, which is pretty much all I drink back home. This restaurant visit neatly encapsulated both of my homesicknesses, haha.)

After lunch, we took the twenty minute walk to the hall. It is called the Sibeliustalo, because of course it is, and it is quite the striking place, hewn out of timber and glass and brick. It is architecturally ambitious. It is set on a picturesque lake. It is sophisticated but raw. It is beautifully Nordic. And it feels like the perfect place for an orchestra like Minnesota to play. I slipped in through the stage door and took my seat.

At that point, there were two and a half hours left until rehearsal began. The exhaustion – the sudden inactivity – the blizzards of scales on trombone and English horn and violas fading in and out – my solitude – the anticipation; the unspoken sense of wanting to prove something – the occasional chatter of Finnish – the sight, but not the sound, of musicians conferencing onstage – all conspired to drug me into a kind of mental twilight zone. Tour, like travel itself, is a swirl of activity followed by long stretches of waiting and in-between times.

Adding to the sense of unreality, the musicians’ wardrobe gradually began to morph as the afternoon went on. They began the day in street clothes. Then more and more men walked onstage in white shirts and black pants. Then finally, right before show time, they started sporting black coats and bow-ties. Together they gave the visual impression of a living organism shedding an old skin and growing a sleek new one. 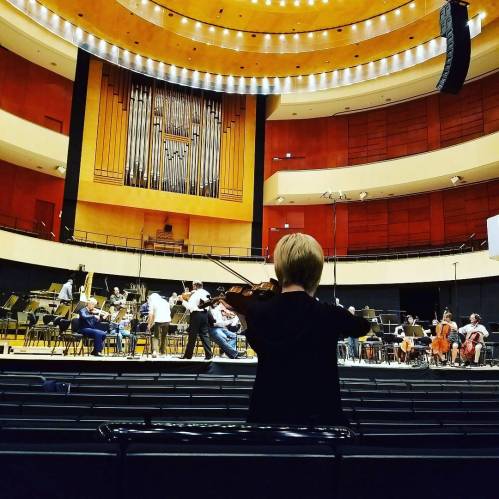 I didn’t use my phone much because I wanted to make sure I had enough battery to run Google Maps for my walk back to the hotel. So I spent a lot of time just soaking up the general ambiance of the hall. The Sibeliustalo is a fascinating contrast to Orchestra Hall. Granted, there are certain superficial similarities: an abundance of glass, wood, maybe a general kind of Nordic understatement. But where Orchestra Hall embraces rectangles and squares, in everything from the shape of its auditorium to the set of the balconies to the cascading hard-edged cubes, the Sibeliustalo embraces gentle curves, eschewing straight lines except for the blocky seat-backs.

But the most striking difference is the setting. Orchestra Hall is fundamentally urban. The glass there frames views of skyscrapers. The glass of the Sibeliustalo frames a view not of skyscrapers, but sky: an ever-shifting landscape of water, forest, and sun. 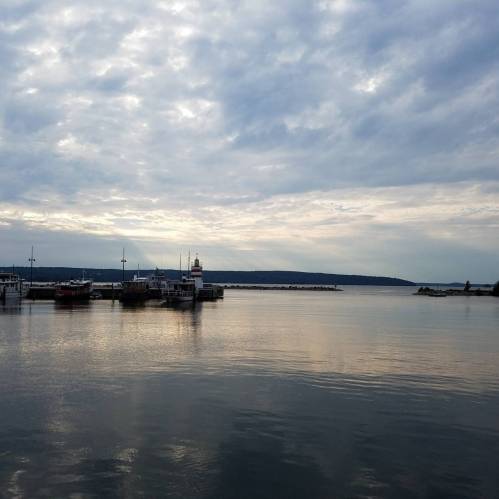 View from the terrace outside the lobby

Finally three o’ clock struck, and Osmo strode onstage. “Welcome to Lahti,” he proclaimed, and then he tore open the first page of his score with the Finnish version of satisfied aplomb.

Technically speaking, there are rehearsals before every show on this tour. But because these rehearsals are strictly capped at thirty minutes, including personnel changes in between pieces, they are more soundchecks than anything. (The official term in the itinerary booklet is “brush-up rehearsal.”) The strictly mandated rehearsal time looms over every note. A white clock with inexorably twitching hands is propped on a music stand, visible to all, and staff gesture from the wings how long is left before time runs out. For an observer, it lends the rehearsal the kind of adrenaline rush usually reserved for a suspense movie: in a world of tight deadlines and international intrigue, will they nail the tempo changes in the Eroica before their – time – runs – out?

I felt like it took the orchestra half of a (much longer) rehearsal to find their footing at Carnegie. So I was surprised by how quickly they roared out of the gate in Lahti. Maybe it was the repertoire; maybe it was the acoustic; maybe it was neither. Who knows. But from my seat, they sounded full and punchy right from the start. The acoustic of the hall really spotlighted the basses, and it lent a real oomph to the sforzandos. Next Pekka Kuusisto hammered through a few tricky spots in the Prokofiev. I was sitting farther away from him than I was in Minneapolis, and some of the harshness of his tone melted into the hall, as steely string sounds are occasionally wont to do. Interestingly, he and Osmo also took some time to go over parts of the famously tricky Sibelius concerto third movement (which wasn’t even on the Lahti program; it’s on the docket for Edinburgh).

My first initial impression of everything was exceedingly positive. But honestly? Half an hour to cover three big pieces is just too short a time to know how they’ll come out in actual performance. Clearly, the concert would be its own test.

Osmo finally asked, “How long we do we have?”

One minute, came the answer.

And with a wave of his hand, he released the players sixty seconds early, and they disbanded with a buzz. 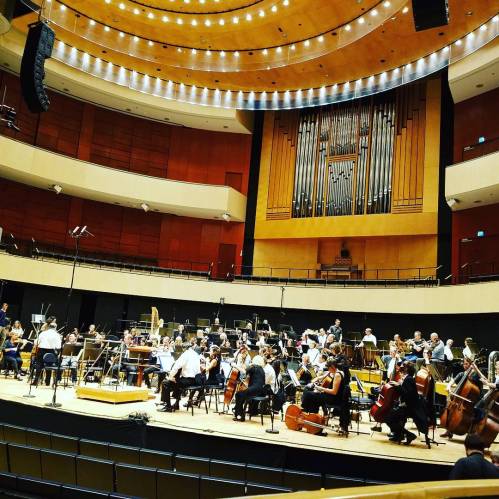 A couple of minutes later, an usher politely threw me out of the auditorium. So I killed some time in the lobby, wandering past the tables of Lahti Symphony CDs for sale, past the counters of desserts and champagne, past the groups of old friends chattering away to each other…in the bizarre position of not being able to understand a single word I was hearing, but also aware that everyone present could understand me, should I choose to speak.

I finally found myself out on the terrace, watching the steady descent of the Finnish sun. It was almost four o’ clock.

7 responses to “#MnOrchTour: Prepping for Lahti”