Hartford Symphony: What the Faq?

But the cat is out of the bag now, and so here is a screenshot of the first two paragraphs. 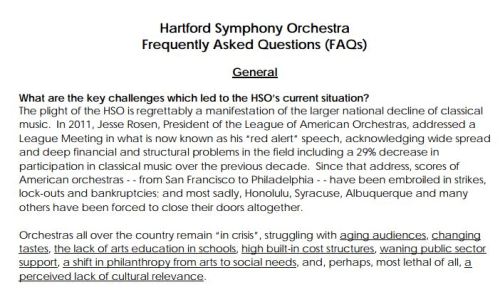 If cell memory from a previous life is tingling… Here’s why.

If you didn’t follow the Minnesota meltdown, first of all, I’m glad. Those days sucked. Second, I’m trying to think of a tactful way to explain to newcomers how financially and artistically bankrupt these three signatories’ ideas are. Let’s just say that if there was a Nonprofit Governance Hall of Fame, these guys would not be in it. Their apocalyptic ideas, strategies, and approaches ultimately met with resistance from pretty much everyone, including the wider board of the Minnesota Orchestral Association. I think most everyone would agree: unless you are interested in institutional suicide, the Minnesota model of 2011 is not one to aspire toward.

Unfortunately, there are many similarities between the failed 2011 Minnesota plan and the 2016 Hartford FAQ. Here are some I found in my first read-through; additional study may yield more. All bolds mine.

Research shows a nationwide decline in the attendance of classical music.

The plight of the HSO is regrettably a manifestation of the larger national decline of classical music.

League of American Orchestras conference focused on the need for change in the field. As League President Jesse Rosen stated in his keynote address: “Our commitment to performance excellence is not enough.”

In 2011, Jesse Rosen, President of the League of American Orchestras, addressed a League Meeting in what is now known as his “red alert” speech, acknowledging wide spread and deep financial and structural problems in the field including a 29% decrease in participation in classical music over the previous decade.”

Orchestras across the nation are stressed. Strike in Detroit, Chapter 11 bankruptcy in Philadelphia and deficits reported by major orchestras.

Since that address, scores of American orchestras – from San Francisco to Philadelphia – have been embroiled in strikes, lock-outs, and bankruptcies.

Orchestras across the nation are stressed.

Orchestras all over the country remain “in crisis.”

For more than ten years, MOA has had an unsustainable financial structure.

The financial decline of the HSO is not a recent phenomenon. The HSO has historically been severely undercapitalized and has posted annual operating deficits of up to $1.3 million for over a decade.

The model was challenged before the recession, but the recession has exacerbated underlying structural issues.

For over a decade, the HSO has had an unsustainable business model.

These are not just similar ideas; they’re similar turns of phrase. How did so many occur in such a short amount of space?

Possibilities (some more likely than others):

It’s just coincidence. It means nothing. Exccccccept that the glaring failures of the past haven’t been studied, and that the Hartford powers-that-be are unknowingly regurgitating ideas and justifications with hugely controversial track records, and that they have zero self-awareness about their field’s epic failures, which of course bodes excellently for all their future endeavors /sarcasm.

There is a document dating from 2010-2011 that both plans drew on. Here’s a creepy thought… What if somewhere there’s something like the orchestral version of ALEC model policies? I only mention it because the similarities don’t stop between Hartford and Minnesota. Read a little more, and you’ll see similar questions and turns of phrases in the FAQs published on the Atlanta Symphony’s website during their second lockout. Could it be that all of these documents are drawing on sources the public doesn’t have access to? Does this tinfoil hat look well on me?

Someone associated with Minnesota is consulting in Hartford. After all, there is at least one Minnesota executive who is now advertising his services via LinkedIn…

And that isn’t even touching on the FAQ’s weak arguments (Hartford says they didn’t tell their public about the financial problems they’ve had for over ten years because this year’s negotiation was private)…shaky statistics (the “29% decrease” is not cited in the FAQ, but is presumably the widely discussed figure from the NEA’s Survey of Public Participation in the Arts, which is an interesting figure I was trying to get Davis, Campbell, and Henson to unpack way back in September 2012; surprise, surprise, they never did)…unanswered questions (why sign their conductor to a six year contract in the face of such crippling financial issues?)…questionable facts (there are still actually symphonies in Honolulu, Syracuse, and Albuquerque)…the unnecessary swipes at musicians (the only work they do is at rehearsal and in concerts? meaning no practice time at home? suuuure; and professional ball players only work a few games a year, right?)…

Hey, Hartford Symphony. Don’t pull a Minnesota on your public. If you’re going to imitate how Minnesota got into its mess, you should also imitate how we got out of it: with new strong leadership, positive can-do attitudes, and creative coalitions with the broader community. If growth is indeed your goal, I promise that there are better ways to get there than the road you’re taking now.

6 responses to “Hartford Symphony: What the Faq?”