Eaux Claires, Saturday, after sunset. The ticket stand was close to abandoned; the workers were joking around as I paid cash for a second ticket. The murmur of the crowd echoed in the valley. Walking down into the field, parts of the path were so dark I couldn’t see my hands.

“Here?” I asked my friend. Close enough to see, far enough away to watch.

She took off her sweater and spread it across the grass. People around us sat, then stood, then sat again. Some were laughing. A few were smoking. The heat had finally broken. Muggy, expectant starlight now.

The crowd shrieked itself into ecstasy as a figure took the stage. It was festival narrator and beautifully talented local author Michael Perry, lit up from behind like a rock star. “Good to see you here. Everybody’s gathered round for…” and his voice sharpened: “vespers.”

Perry offered a brief meditation on the nature of neighbors, of the valley, of music. “And so here we are, cradled by a river in a sanctuary of sound, craving consecration, exultation, on bended knee, seeking benediction.” About halfway through, electronic noises began spattering away behind his baseball cap. New Bon Iver backup singers The Staves listened, their arms around each other. Everything felt tuned to a higher pitch. In more ways than one, the stage was set.

The last Bon Iver show was in 2012. Since then, Justin Vernon has given conflicting answers about whether his band’s hiatus will ever end. Lots of people have trouble reconciling his seemingly contradictory statements, but I…don’t. Here’s how I see it: Justin Vernon is a massive brilliant dork who has found fame to be just as constricting as it is liberating. He is currently exploring how he can best make it work for him and for his community. And that exploration is an ongoing process. Seen through that lens, to me, it all just makes sense. I honestly don’t think he has a big grand plan. He’s just following his intuition, and his intuition is right.

So in this context of rebirth and renewal, it was interesting that he chose to start with Heavenly Father, the only piece Bon Iver had released during their hiatus. In this context, in this night, the act of beginning with new stuff came across as a tentative admission: Bon Iver isn’t done yet. It’s just liquefying into a new stage. 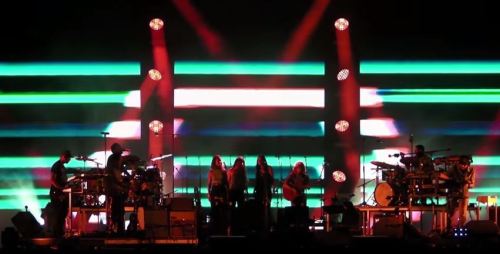 At the close of Heavenly Father, three solo female voices floated into the air. Their harmonies sounded like an ancient pipe organ emanating from deep in the Wisconsin woods. A hush like a blanket descended onto the crowd of twenty thousand. These women sounded exactly – I swear to God, exactly – like the Grecian sirens of old. I will never, ever forget the moment that it dawned on me they were seguing into Lump Sum. They sang eternal music of the spheres.

Afterward: “What’s up, y’all?” Justin blurted, as if he was almost embarrassed of the otherworldly beauty he’d just unleashed. Then, as if he didn’t know what else to say: “Uh, that right there…was The Staves.”

Justin then invited yMusic onto the stage for Towers. yMusic is a band of virtuosos who champion contemporary classical music, indie rock, and other blurry-lined genres. I heard no substantial differences between what they were doing and what an ensemble of Minnesota Orchestra musicians playing a new piece by, say, Judd Greenstein would do. Any divergences were superficial: a bigger stage, a wilder crowd, different backup instrumentation, pulsing neon lights. This made me happy. We all speak the same language, we all have things to learn from one another, no matter what our training, no matter what our backgrounds. Listen to the mesmerizing introduction of Babys: it’s a child clearly born of minimalism. The two-piano version of it comes across as a riff on John Adams’s Hallelujah Junction. The way Babys – and Blindsided – ended on Saturday night, tumbling into dissonant shrieky noise almost orchestral in its sonic complexity, was hugely gratifying. I wish more ensembles, including Minnesota, could connect the dots here.

Justin’s melodic lines throughout the night were very different from the ones on his original recordings. It was fascinating to follow his train of thought. One of Bon Iver’s greatest strengths is their ability to constantly reinvent. They’re never content with stasis. It’s not uncommon for me to have four different performances of one song on my phone, simply because each is so different.

And so it was that my brain began going into analytical and emotional overdrive. The pleasure was visceral. You could feel the guitars plucking the ground, smell the night dew, see the stagelights flare miles up into the summer blackness.

In the middle of the ecstatic distraction, I felt someone touch my leg. I looked down, and there was my friend, wordlessly calling me back to earth. She gestured toward the sweater and then looked up at the twinkling starlight. Take a moment, she seemed to say.

I laid down beside her and looked up into the stars.

Coincidentally – or maybe not – Holocene was the song I was listening to when my teary-voiced aunt called me that I should come to the emergency room to see my mother. I had left her for just an hour to go to an appointment of my own. The moment I left, the truth came out. I still remember humming along to the chorus, then the words being cut off by the ring:

And at once I knew I was not magnificent
Hulled far from the highway aisle
Jagged vacance, thick with ice
I could see for miles, miles, miles

Those will always be some of my favorite lyrics ever.

After an hour, the set was seemingly over.

At this point, um, we usually, like, leave the stage. Cuz it’s what it says on the set list. It’s like, hey, just go off the stage. Why don’t we just stay up here? Sometimes – sometimes musicians do have to leave the stage to you know, use the bathroom or something. We don’t – are you guys good? Alright. We’ll bring out our friends yMusic one more time, and again, Colin Stetson. So. There’s been a lot of talk and stuff, but we wanted to, uh…potentially talk about some new songs and play them for you. I mean, I’m talking about it – that’s not going to happen. Yeah, we’re gonna play you a couple new songs.

What a beautiful, beautiful dork.

Let me just say that it’s been weird at times to be me this weekend, and it feels – just because it feels like a dream, and I’m just so grateful to my family and my friends and to everybody from this town. Whatever is going on, it’s happening, it’s culminating, things are happening, so thank you guys so much. It’s good to be humbled by things, it’s good to be inspired by things. Holy cow. Let’s see what happens after this.

This is what usually happens. This is why you leave the stage. Is this unprofessional? Yes. Somebody’s just like: yes. Super just real quick yes. Unprofessional. Sorry, dude.

The new songs weren’t given titles. Lyrics aren’t available, and making them all out is impossible, although I caught some simple repeated phrases like I heard about it and Don’t wanna leave you alone. Both songs featured repetitive electronic elements. Soaring saxophone and trumpet, then solo violin lines, bubbled from the surface. Waves of big sound. Glowing backup vocals. It all felt very organic and orchestral. New and exciting.

Justin Vernon can insinuate an unending hiatus, and clearly he will work on Bon Iver solely on his own terms and on his own timeline. But I can guarantee that nobody in that Wisconsin field – including Justin – felt like their journey was over. There is still new sonic territory for these musicians to explore, in some way. We listeners just have to be patient.

I wouldn’t mind seeing Bon Iver turn into a band that only plays a few dates a year, if that. A band that does experimentation in the studio just south of Eau Claire. A band that always returns home to the field along the Chippewa River. A band that makes people come to it. It would be strange and unconventional and indulgent and real, and so very very magical. It would be a future as idyllic and mysteriously seductive as the land itself.

Before the second untitled song, Justin offered a few more words. They grabbed my heart. In hindsight I realize they’ve become the thesis statement of my summer:

This is maybe all I can know, or sum up, is that… There’s a lot of things that happen in the world that are hard for us to understand, that are hard to connect with. There’s a lot of question marks about what’s going on, about what we’re supposed to be doing, how we’re supposed to act in this lifetime. Um. But I just think that…. If you don’t have friendship, you don’t have anything. I know that might sound like a Hallmark card or something, but I don’t know – I don’t know, I don’t know if that’s all…like the question that I keep asking myself lately is, like, is there anything greater than us? Is there anything that can push the world…is there anything more powerful or greater than us? And I don’t think there is. I think it’s just us. And I think what we give each other, and what we can believe in each other, I think that’s how we can become greater. And uh, I saw that happening in full effect this weekend, and I’m beyond humbled, and I’m happy to share with my friends, from us to you, thank you guys so very, very much. Be good. We’ll see you around town.

The answers are music and art, and friendship.

I don’t know, but maybe when it boils down to it, that’s all we need to know?

Justin ended the set with Skinny Love, the simple song with the millions of fans.

It turned into an unforgettable impromptu singalong along the banks of the Chippewa River, twenty thousand voices strong. My best friend and I joined in:

Come on skinny love just last the year,
Pour a little salt we were never here,
My my my, my my my, my-my-my my-my…
Staring at the sink of blood and crushed veneer.

Who will love you?
Who will fight?
And who will fall far behind?

At the end of the week, a young cousin and I braved the mosquitoes outside at the farm. In the midst of the uncertainties, an uncle had hung a tire swing from an old oak branch. My cousin and I demonstrated to each other how to climb up it, how to swing above the valley. I wore impractical knee-high boots. At what point had I stopped dressing like a girl and started dressing like a woman?

Just before we went inside, I looked past the swing and down into the ravine. Gray darkness was beginning to encroach beneath the trees, but in the distant field, golden rays slanted into the green.

“What if this is heaven right now?” my cousin asked suddenly, and I looked at her. “What if I got old, then died, then I was born, and now I’m here?”

She twirled around and hung and looked up at the sky, long brown hair skirting the earth.

I opened my mouth to say something.

And my breath hitched in my throat as the summer breeze murmured in the woods, disappearing between the trees.