I’m so excited about the new season and our bright future. And I seriously cannot wait to work with people at the MOA who I was unable to work with during the lockout.

But. Fault lines from a multi-year conflict remain. (No, duh.) And if anyone ever cites false or misleading claims about the negotiations, well, then I have no compunction about setting the record straight. And I’ll use a sharp tongue if necessary, kum-ba-yah-ing be damned.

Board member Doug Kelley came forward today in MinnPost to reminisce about the Petters case and…the Minnesota Orchestra lockout. (Because those two things go together…I guess…) Remember Doug Kelley? He originated the catchphrase “frolic and detour” (frolicking detour?) and was the management go-to spokesman when Michael Henson was so inexplicably unavailable. (Which was most of the time.) Kelley’s stances on the lockout have been viewed as problematic by many observers, as even MinnPost acknowledges. Scott Chamberlain has also had issues with Kelley’s claims in the past, so it’s not just me who finds Kelley so…problematic. So with that in mind…

In hindsight, now that the dust has settled, do you think the Orchestra board’s opening position, a 30 percent cut, was too aggressive and contributed to the level of animosity?

I don’t think so. And there are a couple aspects in answering that question. We needed to end up where we did. In fact I had always hoped we’d ask for and get 20 percent. But if you start at 22 percent you’re not going to get to 20. So listen, I understand the shock value of asking for 30-some percent decrease right out of the chute.

So listen, I understand negotiations, and I get what he’s saying. But I also want to point out that Doug Kelley is cheerfully admitting to bullshitting. Not just bullshitting musicians, but bullshitting the public. How many times did we hear that these particular cuts were necessary to save the institution from complete collapse? Yeah, about those: Doug Kelley is now saying he didn’t really need them to ensure a healthy organization. How do you operate a successful non-profit while simultaneously manipulating such an important number? If these numbers were facades, how many others were, too? Non-profit arts organizations ought to be above this type of shenanigan.

Maybe if the Minnesota Orchestral Association didn’t have a history of deferring to PR companies to decide what size deficits to report – or a history of leaving out important facts when asking for money from the state legislature – or a history of never publicly mentioning Michael Henson’s massive bonuses before muckraking bloggers got to the story – this admission would be less troubling, but as it is, it confirms an unsettling long-term strategy: Show numbers that help you make your case at the time, then reveal later that the true picture was different.

And Mr. Kelley doesn’t think that his bullshitting contributed to the level of animosity?

Not just a river in Egypt!

But I was with Richard Davis [Orchestra board member and CEO of US Bank] and [Orchestra President] Michael Henson as early as 2009 in meetings with musicians. And Richard, who is a great communicator, had all these PowerPoints showing the terrible deficits we were running. And he was telling them, “Look guys, we will honor the current contract. Because we have to legally. But this has to change. It can’t go on. And if you don’t come and help us feather this off a little bit now, by the time [the contract ends] we’re going to have to do something shocking. As in large givebacks.”

And also, while we’re on the topic of deficits: how many of the deficits were the fault of community resources being diverted to the hall renovation…or productive staff being fired to fund executive bonuses…or uninspired programming…or slashed programming…or slashed marketing? In other words, how much of the problem was on the revenue end of the equation versus the expense end? Because if you slash musician compensation without addressing (or even acknowledging) core weaknesses on the revenue end… Well, that’s the coward’s way out. And guess what? Ultimately the same old revenue problems will come back to haunt you, except this time they’ll be tagging along with new problems. Like a tarnished reputation, a wary donor base, and bitchy bloggers. How do I know this? Because I’ve seen this movie before. In fact, I starred in this movie. 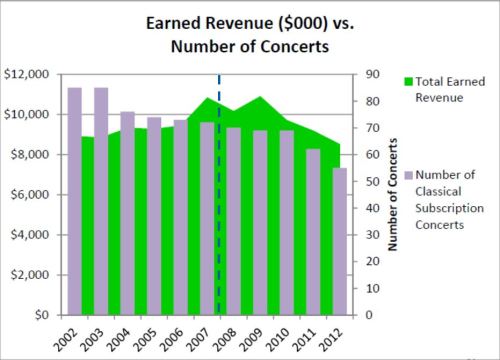 A chart from Save Our Symphony Minnesota’s comprehensive The Lockout Debacle presentation, showing precipitously dropping earned revenue during Michael Henson’s tenure…not coincidentally as he deliberately pursued his pet strategy of putting on fewer classical concerts.

The union did give us some, and then said, “no more.” And every time they offered a new number they wanted to extend the contract, which meant death by attrition.

So with no progress when the contract expired the 34 percent number would have meant perfectly balancing the budget.

Was that a huge ask? Yeah, it was was. But I don’t know  we could have done it differently.

What we didn’t anticipate was that the union was going to take a stance and make Minnesota a test case for the industry.

Yeah, it was totally the union that made Minnesota a test case for the industry (whatever that means). Totally. The reshaping of the Minnesota Orchestra? Definitely The Union’s plan. Can I get some scary sound effects in here? The Union.

Be afraid; be so very, very afraid.

One example there was the local labor lawyer for musicians — he and I had gotten on well in the past— was pushed out and in came Bruce Simon from New York, who was a table-pounder, an in-your-face kind of a guy. [He laughs]. It was great theater. If you’re a trial lawyer you see what he’s doing. He’s performing for his clients. He’s saying what the musicians want to say but won’t. But it was also very counter-productive. Little old ladies don’t like be told, “[Bleep] you” by Bruce Simon, and he literally would do that.

O, so much to savor here in retorting!

I also find it kinda hard to believe that the people in power at the MOA haven’t used these exact same kinds of lawyers in their various high-power business deals. I mean…come on, guys. Board members don’t get to where they are economically and socially without pulling some tough business deals, making a few enemies, and letting a few fucks fly.

Also: I’m a little young lady, and I seriously would not give a single shit if someone said “Fuck you” during an intense negotiation. In fact, I’d happily dish it right back if I knew I was right. What did board members expect, after having initiated a lockout? If you can’t handle the heat, maybe think twice about starting the fire. So do I have thicker skin than MOA board members? … Really? I find that hard to believe.

And one last point: if you’re somehow trying to equate being cussed off by Bruce Simon with losing your job, your life savings, and your (and your family’s) health insurance, then I have something to say to you. Hint: it’s what Bruce Simon said.

We just didn’t anticipate them not negotiating.

Darn the musicians’ not negotiating! Between their offering binding arbitration in September 2012, their agreeing to work with star mediator George Mitchell (who the MOA ultimately chose to ignore), the exchange of proposals and counterproposals before Osmo’s resignation, their willingness to meet and discuss things at any time… They so blatantly refused to negotiate. After all, what motivation did they have to cut a sustainable deal and return to work? Pfft.

They were intent on maintaining this model that has existed since Beethoven’s time.

Wait, WHAT? The business model that “the new business model” was replacing…dates from Beethoven’s time? You’re saying that the musicians thought a business model in twenty-first century America…is the same as what existed in eighteenth-century Vienna?

What does that even mean?

I’m legitimately sad that we don’t hear any more on Doug Kelley’s thoughts on Beethovenian business models and why they won’t work in Minneapolis in 2014, because it’s such a fricking bizarre topic I can’t help but be fascinated with it. 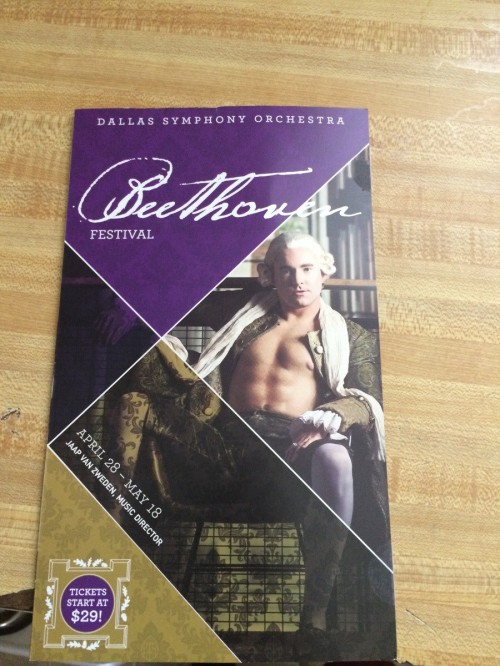 Is this a Beethovenian business model?

Simon said to me along the way, “Doug, the industry is going to have to change. But it’s not going to happen in Minneapolis.”

And why should it have? Industry-changing is clearly not what Minnesota audiences wanted. So why should we be forced to be the guinea pigs in a brave new world of shady financial dealings, pops concerts, and executive overcompensation? Some other city can experiment with new business models, thanks.

(By the way, I think Doug Kelley got his motivations mixed up here… In his earlier analogy, The Union was the one making Minnesota into a test case for the rest of the nation. But here the Union is resisting industry change. Understand? Great, because I don’t.)

The best, though, is yet to come. Take note: Doug Kelley, Minnesota Orchestral Association management negotiator, in MinnPost, 23 June 2014, at 9:37 AM Central Standard Time:

But overall, I think we did achieve a contract that could be a model for the rest of the industry.

I’m immediately reminded of Megyn Kelly asking Karl Rove on Election Night 2012: “Is this just math you do as a Republican to make yourself feel better, or is this real?”

That’s all it took?

A 15% cut in musician pay was the Almighty Historic Dividing Line between the old and new business models?

A suitable justification for a sixteen-month lockout? Millions in lost earned revenue? Hundreds of thousands (millions?) in lost donations?

The work rule changes that were ultimately (thank God) scrapped: you’re saying that those weren’t really necessary to create an industry model after all? They were just…there? Why? For shits and giggles?

Jon Stewart, imitating Megyn Kelly: “I just want to get it straight, Karl, very quickly: are you lying to yourself, or to the millions of viewers?”

The different pay scale for substitutes,

Actually, this is actually a terrible thing, but go on.

a smaller core, and revenue sharing if we hit certain goals are being looked on quite positively I think.

Yeah, well…I’ll be quiet. I’ve said too much already.

But it was never about breaking the union. That was never even considered.

Hey, you know what? I look forward to working with colleagues of Doug Kelley. (I doubt Doug Kelley would ever want to work with me, and it’s probably for the best that our paths don’t cross…) But when the dude goes and spews such total bullshit to MinnPost, don’t be surprised when audiences get pissed off. Apologies if it upsets some people, but these kinds of statements must be challenged, and publicly. Too many people worked too damn hard over the course of years to allow Doug Kelley to so publicly waltz with denial in the pages of MinnPost. So stop saying things that are so easily proved wrong…or, at the least, stop saying things that are so easily misinterpreted. Just stop it.

Now come on. We’ve got a season to enjoy and promote.