There is an elephant in the room, and that elephant is the fallout from the Minnesota Orchestra lockout.

Unfortunately, I can’t do much about that elephant right now. Crucial portions of the future of the elephant, which will determine how I ultimately react to the elephant, are being decided in closed door meetings. My poking the elephant could easily turn counterproductive. And rest assured, I work with friends behind the scenes every – single – day to do what I can to help the elephant; and I imagine many of you do, too. So until there is more concrete information about the state of the elephant, or the state of elephants in general, I want to move onto another topic that brings me joy, namely:

Discovering the work of a forgotten composer – resurrecting one of her compositions – musing on the (dangerous?) nature of our Sacred Canon of Western Art Music – learning what I can about period performance practice of the 1770s – taking up a new violin concerto – and writing about the journey for anyone who cares to read. 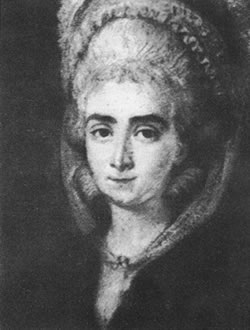 Meet Maddalena Laura Lombardini Sirmen. According to Wikipedia, she was born in 1745 (roughly a decade before Mozart) and she died in 1818 (roughly a decade before Beethoven). We don’t know a lot about her. What we do know, though, is fascinating. She was a violinist, composer, harpsichordist, singer, and businesswoman. When she was 21, she married another violinist and composer named Ludovico Sirmen. Ludovico eventually became involved with a countess, while Maddalena traveled across Europe with a priest. She performed in many of the cultural centers of her day and her work was widely praised. But unfortunately, if predictably, her extraordinary career was largely forgotten in the intervening centuries. In fact, if her name is ever mentioned today, it is invariably because her teacher Tartini (he of Devil’s Trill fame) once wrote her a famous letter about violin technique. But Maddalena Lombardini Sirmen was so much more than a Tartini student. In later blog entries, I’ll try to fill in some more of the details. But it’ll take some time and detective work.

Maddalena has had an IMSLP (International Music Score Library Project) page since May 2009. For a very long time, the only work listed by Maddalena was the Two Duos for Violin in C-major. Very cool, but not very…hefty, for lack of a better word.

But then the other day I saw this:

Or, as my brain interpreted it: 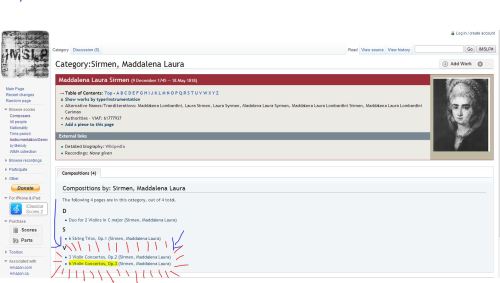 Yeah, way back in April of 2013, someone uploaded something very cool…something that I’d completely missed, since at the time I was busy fulminating in lockout-induced rage. Here is a set of not two, not three, not four, not five, but six violin concertos by Maddalena. Who, I’ll remind you, was a woman touring, performing her own compositions, and being taken seriously as an artist in eighteenth-century Europe.

Sometimes I get exasperated at our historians falling asleep at the wheel.

A few recordings of Maddalena’s work have found their way onto Youtube. Not that I’d endorse you doing this kind of thing (cough), but you can go there and search for “Sirmen violin” and see what you can find. If you like what you hear, buy the set. The tracks appear to be available through Naxos’s Music Library and Itunes.

According to the book Three Violin Concertos, Maddalena’s six violin concertos date from around 1768. They are the work of an assured, accomplished, and ambitious young woman in her early twenties. (There are parallels here with Mozart’s…his famous set of five would come around 1775, when he was in his late teens. Fascinatingly, in 1778, Wolfgang’s prickly father Leopold actually praised one of Maddalena’s concertos in a letter to his wife and son.) Maddalena’s works remained in print for sixty years. It appears they only fell out of favor once the Romantic Era came whirling through the European music scene.

I hear you already. Are these concertos any good? Well, I think they are! Are they masterpieces? I’m not in the business of arbitrating masterpieces. (Besides, are only masterpieces worth knowing? And is the definition of an eighteenth-century masterpiece different than our own? What has the idea of a Sacred Immutable Steadily Progressing Western Canon of Art Music done to our ability to absorb and enjoy music of this era? Lots of thorny questions here.) Do I think Maddalena’s concertos are fresh, engaging, and clever? Yes, yes, and yes! Do they deserve a larger audience? Yes, absolutely! Are they written well for the violin, and are they very difficult to learn? We’ll see; I’m printing out the score to the fifth concerto and putting it on my music stand. I can tell one thing already: the lady liked her trills.

This series will not have a set number of installments or a pre-ordained direction… It will just be a touchstone topic as I explore various related subjects: the fifth concerto of Maddalena Lombardini Sirmen, her mysterious biography, eighteenth-century performance practice, and my feelings about the process of adopting, studying, and resurrecting an infrequently played work. If you’re a violinist looking for a new and quirky challenge, feel free to join me! The sheet music to Maddalena’s six violin concertos is available for free on IMSLP.

2 responses to “Maddalena, Musicology, & Me: Prologue”