MOA has prepared and planned a full schedule of concerts for the fiscal year 2014 (F2014) season, to be presented when the labor contract is resolved. A copy of the full F2014 Concert Program is enclosed as Exhibit A.

I think by “full schedule of concerts for the fiscal year 2014” you mean “The Sh%&%$#st Hypothetical Orchestral Season Ever Known To Man (TM).” But wait, I’m getting ahead of myself…

The program includes concert programs with the Minnesota Orchestra, in some cases with guest artists and conductors

Actually, in most cases with guest conductors…SINCE WE HAVE NO MUSIC DIRECTOR.

as well as concerts by other groups and performers, such as the Preservation Hall Jazz Band, Duke Ellington

Chris Botti, and George Winston. So long as the labor dispute continues, programs planned for the Minnesota Orchestra, of course, will not be held.

When a new labor contract becomes effective, MOA will promptly reinstate this programming, subject to any modifications needed if planned guest artists are no longer available.

MOA hopes that all other F2014 planned concerts involving artists other than the Minnesota Orchestra will move forward, unless such artists cancel performances due to the labor dispute and in response to anticipated pressure from the musicians’ union and/or other third parties.

Yeah, artists won’t cancel just because of the labor dispute and in solidarity. They’ll cancel “in response to anticipated pressure” of the brutal hardball tactics of…Save Our Symphony Minnesota?

Musical acts from all around the world fear the great power of this omniscient third party.

As previously noted, MOA has prepared plans for F2014 along two separate paths, depending on when the labor dispute is ultimately resolved by mutual agreement, to ensure it keeps music alive in Orchestra Hall.

The hall is alive, with the sound of music…

In addition to its efforts to maintain and present performing arts events scheduled as part of its regular season (discussed above), MOA has aggressively sought to add performances to increase the music activities and events in the Hall.

Annnnd, how is that aggressive seeking working for you?

Hmm. Not so well, then. I’m guessing four of those ten performances are the Concordia and St. Thomas Christmas performances. I hear they’re disappointed to have to use the hall, but they’d be out thousands if they canceled now and tried to find a new venue. They are in a truly impossible position. Also, I highly doubt they will return to Hall until the labor dispute is settled. So something to keep in mind if the MOA wants us to use this data to extrapolate into the future.

As for the other six, who wants to bet that most of those will ultimately be canceled or postponed? Question: does one of them include the 2014 Symphony Ball, since we now know that Symphony Ball is a public performance? Will Belladiva return, or will the MOA get Duke Ellington? I’m on the edge of my seat!!!11!

For example, MOA is in discussions for a prominent music group to perform a five-concert series during F2014.

It is also making arrangements for the Hall to be available for performances by other music groups, including professional, community and school orchestras, choruses and youth groups.

First of all, I’m super impressed by “make arrangements for the Hall to be available.” What does that all consist of? Sitting by a phone? Making sure the water and sewer is still connected? Trying to retain the employees they’ll need to book acts?

Second, is this a tacit acknowledgement the MOA is hiring a foreign orchestra to come visit us? Because no professional American orchestra will sign any kind of deal with the MOA…

Not all the concerts? Just…many? “Yeah, those youth groups. Screw marketing for them.”

and bring people downtown to enjoy the music and the newly renovated Hall. These community events will meet the Governmental Program objectives of showcasing music and cultural performances, furthering music education and community engagement, and drawing people to the City to patronize local businesses and restaurants.

If…they happen, right? Because there’s no guarantee at this point that they’ll happen…

Because planning is continuing, it is difficult to accurately predict the number and scope

It’s a Michael Henson buzzword, everybody! Let’s hear it for “scope”! *applause* Now if only “puzzling” could make an appearance…

of such performances. In addition, some groups have expressed hesitation in using the Hall because of interference and pressure of adverse publicity and picketing reportedly threatened against performing organizations.

Oh, that’s right, that threat is familiar…because I was the one who made it.

MOA efforts to date suggest that many (but not all) planned music groups will in fact move forward to perform in the Hall,

Hm. I’m not sure that I would say that, knowing what I do about the somersaults that many local arts organizations had to turn in order to find alternate venues because they couldn’t work with an employer that sees fit to lock out its employees for years on end, but you know, alternate realities are entertaining and fun, so if they make you feel better, who am I to burst that bubble?

though ultimate results will depend on the extent and nature of such labor activities which are well outside of our control. 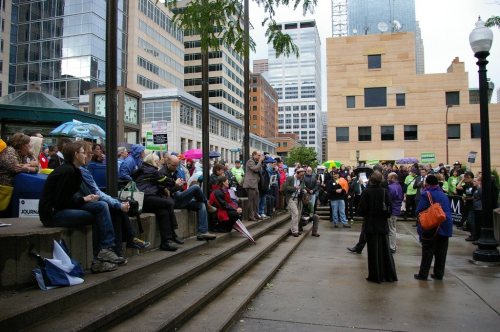 Here I am partaking in uncontrollable labor activities…in a floor-length ballgown. Terrifying…yet simultaneously slightly badass. You got to admit, MOA board… Is this not just the slightest bit badass? Slightly? No?

By the way. You want to have your mind really blown? A mere few months ago, the MOA said to the Strib:

General manager Robert Neu said the orchestra will not present any artists in the hall until the contract issues are resolved.

Next time, in the exciting conclusion of Happy Fun Exciting Hall Operations Analysis, we’ll visit the gravestone of the Strategic Plan and dissect the gripping non-existent 2013-14 Minnesota Orchestra season. Make sure you join us again! Update: you can read Part 3 here!