I’ve just had the most fabulous conversation with the MOA on Facebook!

True, in order to get it started, the MOA needed a little nudging from David Assemany, from Save Our Symphony Detroit, because the MOA still has some trouble acknowledging I exist. But: a conversation nonetheless. Here’s a link to the full thing. (Until it’s taken down, of course.) 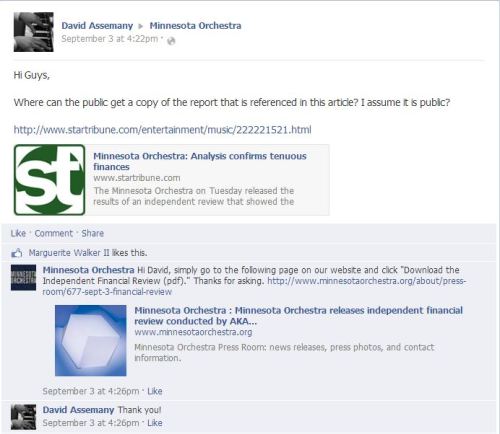 (By the way, this independent financial review is completely bogus. Robert Levine explains why.)

Of course I, sensing an opening to be annoying, asked…

When that wasn’t answered, I poked them a little more…but then thankfully David backed me up.

Then… (Cue the trumpet fanfare.)

I’ve been wondering for months what the hell the full Strategic Plan is. Witness my January 2013 Minnesota Public Radio commentary, where I wrote:

The full title of the “Strategic Plan” PDF on the orchestra’s website is “Minnesota Orchestra’s Strategic Business Plan Summary.” Presumably there is a longer document somewhere that explains in greater detail where exactly MOA leadership wants to take the organization and why. Where is this document, and what does it say?

WELL, IT TURNS OUT THERE IS NO SUCH DOCUMENT.

And it’s not like I was a complete idiot for assuming there is. The PDF file is called “Strategic Business Plan Summary.” At the bottom of nearly every page is emblazoned the words “Strategic Business Plan Summary.” Insinuation: it’s a summary. Plus, the stuff inside it is utterly meaningless glossy pablum. The brightest minds in Minnesota business couldn’t have agreed to this without more detail. Right?

WELL, IT TURNS OUT THE BRIGHTEST MINDS IN MINNESOTA BUSINESS AGREED TO THIS WITHOUT MORE DETAIL.

So let’s look at the Strategic Plan Summary with fresh eyes, knowing there is no additional strategic plan, and that the supporting documents are embargoed somewhere in the depths of Orchestra Hall, and that we are apparently not allowed to look at them.

Some of the problems I’ve pointed out on the blog before, like:

But there are so many more amazing nuggets of meaningless nothingness to feast upon.

“Respond to market trends in social media.” Well, that ship has sailed…

“Optimize revenue opportunities in renovated Hall: food/beverage sales, increased Hall rentals.” But – how? Can Hall even legally serve food? Will they have cooks on staff? Will they get a cut from caterers? Is there a caterers’ kitchen? What are food sales going to do? What foods will they selling? What is happening?

“Initiate national and international touring strategies.” I’m going to initiate strategy for my personal national and international tours. After I’m done writing this entry, I’ll amble over to Kayak.com and see how expensive it might be to fly to London. I don’t actually have to tour; I just need to initiate the strategy to tour. Strategy initiated. Done and done. Check mark.

“Achieve glow effect of $200,000 in additional earned revenue from excitement surrounding Hall renovation.” A glow effect? What the hell is a glow effect? How do you calculate it? I don’t know! Google it. There’s nothing except Photoshop tutorials.

If we’re just pulling random numbers out of thin air (or out of other locations), I’m going to say the hall will bring $50 million in glow money. Why? I don’t know. But here’s the scary part: you have just as much of a reason to believe my number as theirs. They don’t, as my algebra teachers used to say, show their work. Supposedly somewhere in Orchestra Hall there are “internal documents” describing how they came to that number. But we’re not allowed to see them. So how was the number arrived at? What, did Michael Henson dictate to a secretary: “There will be a glow effect of $200,000!” and lo and behold it was true? Did they use a Ouiji board? Have a monkey slap a typewriter? NOBODY KNOWS.

And that’s just a hint. You can read – or skim; there’s not much to actually read – the entire Minnesota Orchestra 2012-2015 Strategic Plan here.

I hear that fundraising professionals in Minneapolis get together, drink, and make fun of this Strategic Plan. That’s how awful it is. It’s an embarrassment. It means nothing. It is garbage. It’s not even a strategic plan, because that insinuates it’s strategic, and a plan. It’s neither of those things. It’s words. On a page. With pictures. And bullet points. NOTHING MORE.

I think the thing that amuses me the most about the Strategic Plan  is the fact that they so carefully, lovingly, placed the new (well, old) mission statement in the Strategic Plan – and then COMPLETELY IGNORED all of the failed un-achieved goals from the lost 2012-2013 season.