Some Dorky Musings on Endowment Sizes And Base Salaries

I worked up some charts yesterday, both to gain insight into the Minnesota Orchestral Association’s math, and to prove (once again) that I am a massive nerd with absolutely no life whatsoever. I used numbers gleaned from Wikipedia’s list of the population of American metro areas, this list the Strib published of orchestra base salaries, and a chart the Minnesota musicians made about other orchestras’ endowment sizes.

A technical note before we continue…

First, I’m going on the assumption that the musicians’ numbers for other orchestras’ endowments are accurate. I don’t have access to any other information besides what appears on their chart, so I have no way of double-checking it or understanding its full context. If in future other sources appear that contradict their chart, I’ll gladly make note of that and update my own.

Second, keep in mind that the musicians’ chart assumes that all of the MOA’s investments (the MOA endowment, money from the Oakleaf Trust, etc.) will total $200 million once Building for the Future fundraising is completed. The organization had $139 million in 2011, and the MOA is advertising that they will have an additional $30 million for artistic initiatives and $30 million to support the existing endowment). The MOA still hasn’t made it clear how that extra $60 million fits into the structure of the MOA. How much of it has been raised? When will it be available? Will there be restrictions upon its use? Was any of this money included in the 2011 Strategic Plan charts? We don’t know for sure. But for the purposes of my calculations, I had to choose a figure, so I went with the musicians’ $200 million. However, the more I think about it, the more I feel they’re probably pretty close to the mark. As I mentioned, in November 2011, the Strategic Plan said that the MOA’s invested assets stood at $139 million. The market has performed well since then; the Dow, for instance, has climbed fifteen percent. There could well be $160 million in the MOA’s investments now, even before you add on the completed BFF fundraising. So I feel that $200 million post-BFF is a reasonable assumption to make, especially given the extremely limited amount of information the MOA has shared about the state of its finances. However, even if the value of the MOA’s current investments plus BFF fundraising is smaller – say, a more conservative $170 million – the point of this essay will still stand. Those with more insight into the inner workings of the MOA can feel free to dispute my assumptions and methodology, and like I say, if I get any new information that contradicts what I’ve already heard, I’ll gladly discuss how I was wrong and why.)

I wanted to get a better idea of how large the MOA’s endowment is in relation to our population, and compare it to other cities. So I came up with an equation: (dollars in the metro area’s endowment) / (number of people in that metro area). For example, according to the musicians’ chart, the Boston Symphony endowment is $387 million. According to Wikipedia, the Boston metro has 4,591,112 people. So $387,000,000 / 4,591,112 = $84.29 per person. Do that same calculation for other cities, input the results into a pretty blue chart, and you get this: 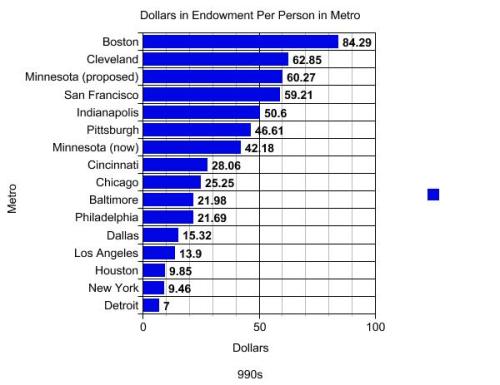 So we here in Minnesota are sitting pretty pretty, especially once the BFF “artistic initiative and endowment support” money kicks in. Good for us. We’re clearly willing to pay top-dollar for great symphonic music. Since we’ve raised so much money per person compared to other cities, and since we’ll have the fourth largest orchestra endowment in the United States once BFF fundraising wraps up…surely we’re doing everything in our power to attract first-rate musicians? It wouldn’t be an efficient use of our money to do otherwise, would it?

Question: Is there a reason that we’re near the top in the first picture, and at the bottom in the second?

One more chart. The equation here is (the number of dollars in the endowment) / (base salary)…

An interesting thing I found while number-crunching is that base salary actually, generally, corresponds roughly with the size of the organization’s endowment. It’s not a given, but it’s certainly a trend. Here’s an equation: (the position an orchestra is on the purple chart) – (the position an orchestra is on the red chart). That equation will tend to equal zero. Positive numbers indicate more relative emphasis being put on the endowment; negative numbers, more relative emphasis on musicians’ salary. (It’s an imprecise equation, I know, but bear with me.)

In other words, if the industry adapts the MOA’s endowment-to-base-salary ratio, there would only be a handful of full-time symphony orchestras in this country. And semi-pro groups? Forget about them. If this becomes the new normal, I’d probably have to pay my little regional semi-pro orchestra something like $2000 every time I performed with them. 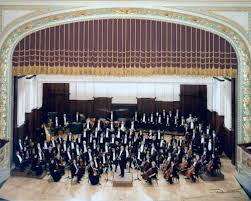 Orchestras. On second thought, do we really need them?

I guess this is the question I’m getting at… Does literally every other orchestra in this country besides Boston have an unsustainable relationship between endowment and salary? Or is Minneapolis embarking on a plan rife with hugely alarming inefficiencies?

What’s the MOA’s position on this? Would they say that endowment size is actually relatively irrelevant to salary? Then why is the endowment figuring so prominently in the discussion? Is the problem difficulty fundraising for general operations, or depressed earned income? If the former, how (and why) did we accumulate the sixth largest endowment in the United States, and yet had so much difficulty garnering contributions that our salaries need to drop behind cities like Cleveland, Cincinnati, and Detroit? If the primary problem is depressed earned income…that’s a barrier that can be overcome relatively easily. I have no doubt that with the right people directing the effort, given our well-educated population, we could outpace what Cleveland’s doing. Why is the relationship between the endowment size and base salary at every other American orchestra (besides Boston) so dramatically different from the proposed Minnesota one? How big would the MOA endowment have to be to support the FY2012 Minnesota base salary of $111,000? According to the 2500x base ratio, we’d need to have roughly $278 million on hand. Where’d that ratio come from, since nobody else in the business besides Boston follows it, or even comes close to following it? Are all American orchestras besides Boston permanently unsustainable? It is all, as Mr. Henson likes to say, very puzzling.

This is just one way of looking at things, of course. There are a lot of caveats. The methodology has its flaws. It’s just a thought experiment thrown out into the ether, and dissect it as you will. But I wanted to throw it out to you nonetheless, and see what you think. Feel free to shoot the numbers back at me in a way that will convince me I’m crazy. Thanks.

Leave a Reply to Song of the Lark Cancel reply