This testimony by Minnesota Orchestra musician Doug Wright was given to the Commerce and Consumer Protection Committee of the Minnesota House of Representatives on 23 January 2013. Rep. Joe Atkins chaired.

You can listen to Doug Wright’s testimony here. It begins at 28:10, directly after Mr. Henson’s testimony. Mr. Wright appeared in front of the committee with his coworkers Tony Ross, Cathy Schubilske, and Burt Hara.

DW: Thank you, Representative Atkins and committee members for your public service and your attention to the impact of lockouts in our region. My name is Douglas Wright, and I am proud to have been the principal trombonist of the Minnesota Orchestra for the past eighteen years. During that time, I, along with my team here, have played literally thousands of concerts for millions of people here in Minnesota, throughout the nation, and around the world. From Minneapolis to Bemidji, St. Paul to St. Cloud, and Pipestone to Roseville, the Minnesota Orchestra has had the privilege to bring world-class performances of great music all over our great state. The Minnesota Orchestra has also had the honor of representing our fine state throughout the United States and abroad, and we’ve been proud to bring home critical acclaim and recognition for our efforts. After our 2010 performance with Osmo at Carnegie Hall, one of the most respected critics in our industry, Alex Ross of The New Yorker, went so far as to call the Minnesota Orchestra the greatest orchestra in the world.

The strength of the music-loving community that supports such a world-class symphony orchestra is rooted in Minnesota’s exceptional music education programs. The lockout by our management has demonstrated disregard for this greater musical community, especially students. The lockout cuts their connection to great music through the resource of the Minnesota Orchestra musicians. For years, Minnesota Orchestra musicians have served the state’s thriving community and music and educational programs. We volunteer to teach, conduct and coach youth ensembles and judge young artists’ competitions. In addition to our traditional concert programs, we perform in Kinder Konzerts for preschoolers, we do school visits and instrumental clinics, and perform children’s concerts in the metro and around the state. We know firsthand the well-documented value of music to students, improved reading and math scores, discipline, self-motivation, and socialization. Recent studies show that students in high school band and orchestra programs have the lowest controlled substance use of any other group studied.

The musicians’ latest outreach effort is to help teach and raise funds to support the new El Sistema free music education program in North Minneapolis. For years, the Minnesota Orchestra management has emphasized our work with children and school groups to the legislature. They have appealed for Legacy money, touted school group visits in bonding proposals and fundraising appeals. However, in the past four years, the current management has failed to schedule several weeks each season that had potential for multiple educational or outreach services. These were paid-for weeks that were simply left blank. Despite musicians’ requests and suggestions for meaningful use of these unscheduled weeks, a total of about $2 million worth of services have gone unused. Now, as part of the lockout, the current Minnesota Orchestra management has canceled youth orchestras and competitions unnecessarily. Our differences may be great, but I never imagined they would disconnect music from the community and children in this way. The musicians know that development of young musicians and students doesn’t stop because of the management’s lockout, so the musicians themselves are now making plans to produce, pay for, and perform outreach and education concerts over the coming weeks to fill the void left by this lockout.

The management has effectively severed a vital and unique nerve within our community in the Twin Cities and throughout Minnesota. Since this lockout began on October first of 2012, most of my colleagues and I have been forced to take our talents elsewhere performing with other orchestras throughout the country and abroad. I have had the good fortune to play with some of the other world-class American orchestras, notably the Philadelphia Orchestra, the Chicago Symphony Orchestra, and the New York Philharmonic. In each of these places, as I describe the situation to colleagues and managers in these orchestras, I am met with looks of disbelief and astonishment at the situation here. It is quite clear that the drastic cuts and tactics being conducted here are not occurring everywhere else in this industry, despite claims to the contrary by our current administration. On the contrary, a number of our peer orchestras have recently settled contracts with modest increases and are actually filling vacancies. If this lockout continues, they’re going to be filling their vacancies with our players.

It is becoming increasingly clear just how isolated our current leadership has become through these tactics. In a year-end list of most notables, the aforementioned New Yorker critic Alex Ross wrote, and I quote, “A special citation for Quickest Plunge from a Great Height is handily won by the management and governing board of the Minnesota Orchestra,” end quote. This lockout is not only irreparably damaging the trust between this community and our organization, it is severely tarnishing our image throughout our own industry. This will have lasting, devastating effects in attracting and retaining world-class musicians and conductors here, regardless of how this mess turns out.

The good news is that through my recent travels, I have seen and heard the proof. The Minnesota Orchestra has achieved a technical ability and a level of artistry that rivals any of the great orchestras in this nation, and indeed the world. It is truly a world-class great symphony orchestra. The bad news is, if this lockout continues much longer, it no longer will be. Furthermore, if the terms and conditions of our management’s final offer – an offer that includes thirty to fifty percent pay cuts, a massive cost-shift in healthcare expenses from the employer to the musicians, and an elimination of over forty years worth of accrued working conditions – if that final offer is ever carried forward, the Minnesota Orchestra – your Minnesota Orchestra – their Minnesota Orchestra – will lose its world-class status, its major league status.

As our finest players leave for higher ground, each taking their individual talents and shine along with them to other orchestras – you can see for yourselves on the chart labeled Twenty Year Minnesota Orchestra Salary Comparisons the devastating effect their final offer will have on our orchestra compared to our peer orchestras. 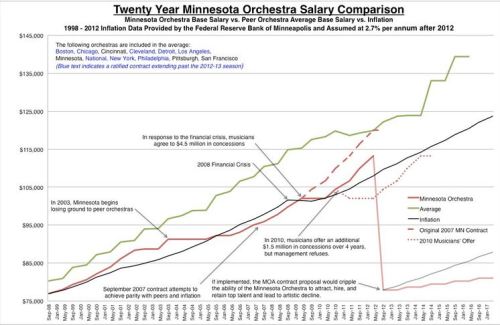 Management suggests, as you just heard, that their extreme proposal represents a nationwide trend. The truth is that our peer world-class orchestra in Cleveland, a city with a weaker economy and a smaller orchestra endowment, has recently quietly settled a contract with modest increases and is attracting record numbers of young people to their concerts. The Chicago Symphony has recently settled a contract with increases and their musicians continue to serve their community through innovative outreach and education programs. The National Symphony in Washington, D.C., also managed to settle a contract with modest increases without a lockout. Surely Minnesota’s thriving music community and aspiring musicians deserve continued music from world-class mentors and performances as well. As you can see on the chart labeled 2011-2012 Major Orchestra Endowments, our generous arts-centric community has supported this orchestra to such a degree that the Minnesota Orchestra currently has the sixth-largest orchestra endowment of any American orchestra.

However, management’s final offer would diminish the Minnesota Orchestra’s ranking from ninth to fifteenth among major American orchestras. On the chart labeled 2012-2013 Base Salaries of Top Ten Orchestras, you can see that management’s proposal would nearly double the number of job opportunities our musicians would be able to consider, including a number of orchestras that have historically never been in the running for taking our players.

JA: No, I appreciate it. You’re making excellent points. But we’ve got… Some folks who are going to speak together, so I’m not too worried about staying on schedule. I just wanted to make sure that we’re kind of concluding. Thank you.

JA: And you were just getting warmed up!

DW: No no no no no. [laughter] The real impact of this lockout is if you take into account the proposed reductions in performances of great music, the lost opportunities for students and young musicians, the proposed cuts in the numbers of musicians and salaries, the canceled concerts, the damage and integrity of the state’s most venerable arts institution, this lockout unnecessarily risks leaving us all with a third-class arts resource in a world-class region and a world-class state. We didn’t build Target Field for a minor league baseball team. If the Vikings win the Super Bowl they are not handed a severe pay cut. The new Guthrie wasn’t built for Minneapolis to become mediocre in the theater. As stated by Michael Henson in a 2008 Star Tribune article, “There is no point in having a great building without having great art inside it.” So why then would we build a $52 million lobby and take away the world-class music from within? Thank you for your time.

JA: Thank you. That was a crescendo!