Here’s an essay that I published on violinist.com in April 2011. I was extremely touched by the reaction it garnered there, and so I’d like to reproduce it here.

My violin has laid in the corner of the room for weeks now. I haven’t picked it up at all, save for the ninety minutes I spend every Thursday night at orchestra rehearsal. But I’ve decided to cut myself some slack because my life is currently spinning out of control.

In the last six weeks alone, I have started seriously contemplating moving from the small town in which I’ve lived all my life to Minneapolis; I decided for sure that I am going to try my very best to become a music writer and musicologist; I saw the Minnesota Orchestra play one of my favorite pieces of all time, Ravel’s La Valse; I spent a thrilling day with a musician and writer I admire very, very much; I made contact with a professional string-player who has the same ridiculously rare health problems I have; my beloved 15-year-old cat was diagnosed with cancer; she died a few days later; I made an inadvertent discovery of a truly devastating secret that I was never meant to uncover; family tensions simmered; unbearably tight financial pressures grew even tighter; and yesterday my other teenage cat was diagnosed with a life-threatening uterine infection. Not to mention all of the horrors happening all around the world. And we’ve had the strangest spring weather, to boot. We’ve emerged from one of the snowiest, most brutal winters we’ve ever had directly into what could easily pass as late autumn. There has been no sunlight or warmth or light or any of the lovely spring things traditionally associated with April: daffodils, maybe, but to be honest, at this point, they’re growing in spite of themselves.

In any case, whatever the reason, whatever the reasons, I’ve got a bad case of emotional whiplash. This morning I was so numb from yesterday’s diagnosis that I didn’t feel like getting out of bed. It took me almost half an hour to drag myself out, eat a bagel for breakfast, feed my ailing cat…and stuff my music into my neglected violin case. This noon my little string orchestra had a concert at a local organization called the Community Table, which serves a free meal every day of the year to whoever wants one. This organization does hugely important work. And trust me, you don’t know how important it is unless you’ve been food insecure yourself. So I got there at eleven, feeling a little disheveled from yesterday’s day of trauma, but still excited and resolved to play. I’d been sick for the last rehearsal, and all of the musicians asked how I was feeling. Their love and concern was touching, and the memory of yesterday’s tears began to fade, a little.

We started with a G-major scale to warm up, then played our way through a set of relatively simple pieces, with a chunk of the first movement of Brandenburg 3 for good measure. Every once in a while came a round of applause from the diners. We smiled and grinned at them. The organizer came up beaming in the middle of our set and said, “I think you should know that one of our guests just said, I’m so thankful for the angels who are playing here today.” We all blinked quickly a few times and moved onto the next piece as fast as we could. There was a comic interlude, during which we had a group picture taken against one wall. First we blocked the door to the restroom. Then we scooted over. Then we had to scrunch so closely together that we were practically cheek to cheek. We all got a fit of the giggles. Then we had a ten minute break where we had some coffee and shot the breeze and talked about how much we were enjoying ourselves. Then back to the set. The last few pieces had to go at a quicker pace so we’d finish up by one – “’Swing Low, Sweet Chariots’ should be taken faster, like the chariots at the royal wedding,” our conductor advised. As we were packing up, a gentleman came up and told us, “Thank you so much for the best fifteen minutes of my week. If I had known you were coming, I would have gotten here earlier.” And at that moment I felt a great thankfulness for him, and a great kinship with him, and a great thankfulness for that great kinship…as it was the best fifteen minutes of my week, too.

This is a cliché, but – I am so blessed. And musicians? We’re even blessed-er. Even if absolutely everything feels as if it’s going wrong in our lives – even if we have been pounded into the pavement again and again and again, until we are convinced we can’t take another day of it – even if we’re chronically dizzy from the dull stuffy headaches that come after long bouts of crying late into the night, and even if our eyelashes are stained with the salt of our tears, and even if our hearts and ribs and throats feel as if they are loaded heavy with lead – the fact remains: we are so blessed. We are so powerful. We have a precious, precious talent that we will be able to employ for as long as we want to groom it: we have the ability to bring joy and beauty into other people’s darkened lives…and in turn, into our own. It doesn’t matter if we can’t play the Caprices, if we can’t get into Juilliard, if we haven’t made a world-class orchestra, if we will never play the Sibelius, or the Bruch, or Mozart 3, or more than a handful of Suzuki books. If we can draw a semi-decent tone, and hit some of the notes some of the time…really, honestly, that’s all it takes to brighten and beautify a day and a life. I’m not saying that we shouldn’t care about being the best musicians we can be. It’s hugely important to always want to excel (says the woman who hasn’t practiced for weeks; remember, kids, do as I say, not as I do). But we severely underestimate our own capacity to illuminate the world. Today I realized it is in our most trying hours as musicians that we need to remember that the most.

***
A few people have emailed me wondering what happened to my second cat. Sadly, she too passed away after surgery on May 4. I’d like to dedicate this entry to my two extraordinary kitties – Demi (1996-2011) and Winks (1997-2011), who brought so much light and joy into my life. 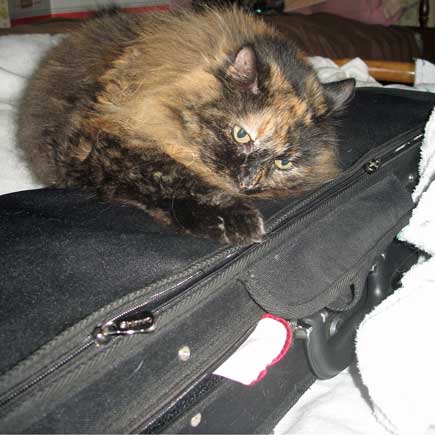 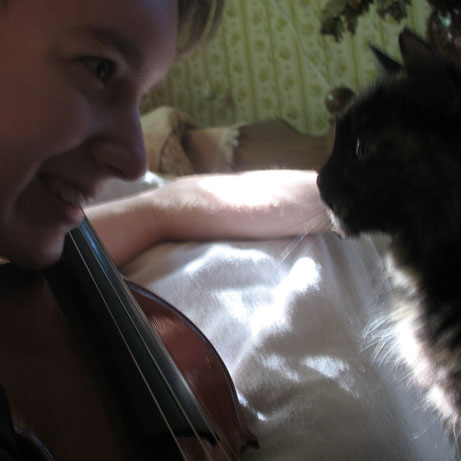 One response to “A Blessing”